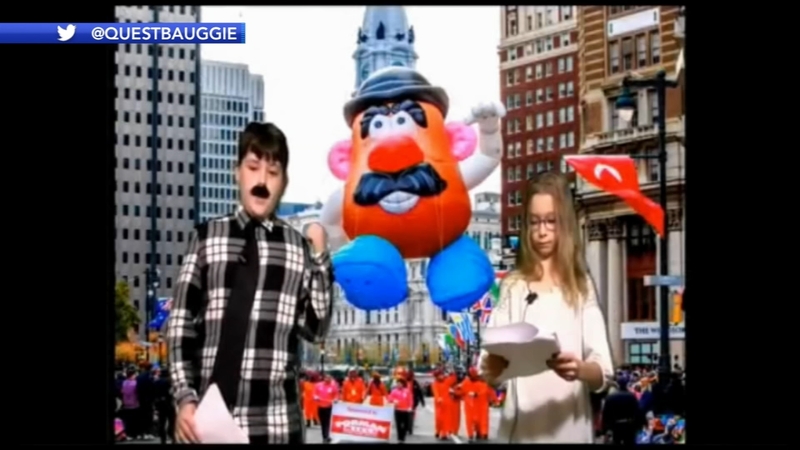 Bucks County elementary puts on their own Thanksgiving parade

Fifth graders teamed up with first graders at Butler Elementary School in the Central Bucks School District to create their own Thanksgiving Day Parade, using robots, coding, and video magic.

"The project was truly inspired by all of the hype around the 100th parade," STEM teacher Bridget Augustine told 6abc.com Saturday.

Augustine said she is always looking for ways to include her Dash Robots for her STEM classes, which is called QUEST (Questioning Engineer Science Technology) at the school.

Dash Robots, created by the company Make Wonder, are used in classrooms to help kids learn coding and robotic skills.

To inspire her students even more, Augustine shared the book "Balloons over Broadway," a story of puppeteer Tony Sarg who designed the large helium balloons we have known to love at parades across the country.

The students got to work together to create their own balloons, using the Dash Robots.

"The best part was utilizing buddies. The fifth graders became the teachers and helpers for the first graders. The first graders had the vision for the balloon," Augustine said.

She said both team members had to plan like an engineer using the materials they had at their disposal.

After each pair made the balloon together, it was time to create the coding to drive the Dash Robot.

And you can't have a 6abc Dunkin' Thanksgiving Day Parade without it being televised.

The Butler Elementary School's version of the 6abc Dunkin' Thanksgiving Day Parade had it all (and we've only seen a portion of it!) - from Rainbow the balloon which celebrated "all that is good in the rainforest" to Snoopy to a stylish Jim Gardner-esque mustache!

Wilson told 6abc.com that the parade is just one of many of projects the QUEST students are creating.

They are also working on 'Coding Candy Land,' where the students will be turning the classroom into a board game and coding their way through to win.

Because of the popularity of QUEST, Augustine and Wilson started a coding club at the school.

"Originally for 36 students, on day one we had over 120 applications," Wilson said.

One of the hosts of the Butler Elementary students' parade said in the video, "I can't wait for next year already!"