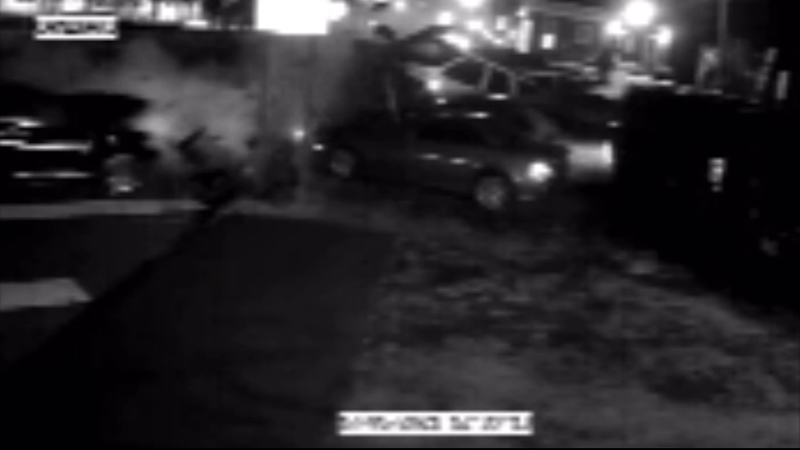 BERLIN, New Jersey (WPVI) -- Two people are in critical condition after their vehicle crashed into several parked cars at a dealership in Berlin, New Jersey.

Surveillance video of the crash shows it happening around 12:45 a.m. Tuesday at Diamond Auto Sales.

The dealership is located on a triangle-shaped lot where S. White Horse Pike splits into Jackson and Tansboro Roads where traffic flows on both sides.

The two-door Honda Accord can be seen in the video traveling on White Horse Pike, but failing to turn in time before colliding with the parked cars.

"This is a disaster for us," said dealership owner Brian Johnson.

Johnson is trying to figure out the best way to remove an SUV that was forced on top of a smaller car.

"We're a small business. I only have 20 cars here total. Losing seven of them is really bad," Johnson said.

Investigators said the person driving the Accord was traveling at a high rate of speed and lost control at the turn.

The driver and passenger were trapped inside and were later rushed to the hospital in critical condition.

"Business has been here 23 years. This is the first time anything like this has ever happened," Johnson said.

Johnson said he's been selling a lot of cars during the pandemic, but he's now facing a setback because he said it's become more difficult to replace vehicles due to high demand and prices.

"Who knows how long before insurance pays out a claim on it. It hurts," Johnson said.

He believes his business will pull through and hopes the same for the people critically injured in the crash.