Overall, the Philadelphia Police Department has recorded 262 stolen cars and 50 attempts so far in 2022.
WPVI
By 6abc Digital Staff and Maggie Kent 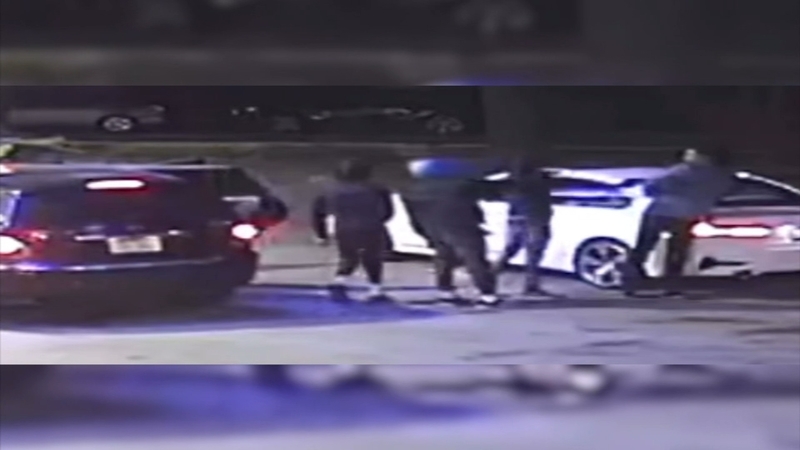 PHILADELPHIA (WPVI) -- Philadelphia police are searching for three suspects responsible for a carjacking at gunpoint in the city's Germantown section.

The incident happened just after 12:30 a.m. Friday on the 5900 block of Wissahickon Avenue.

Police released surveillance video of the incident on Tuesday showing a group of males carjacking the victim at gunpoint while at a gas station.

The victim stated to police as he walked back to his vehicle, the suspects pulled up next to him in a black Mercedes Benz E-Class Wagon with chrome trim around the windows.

The suspects then got out of the Mercedes.

Police say they then robbed the driver, taking off with his white BMW.

Both vehicles fled in the direction of Lincoln Drive.

The driver was seen outside the car on the video with his hands raised.

Surveillance video later revealed a female victim was also held up at gunpoint in the passenger seat.

The female victim, who wishes to remain anonymous, told Action News she was on a first date that ended in a terrifying manner.

"They took her out of the car. They took them both to the woods. He was even hit by the guys," said Samuel Pilli, owner of the gas station.

Pilli described the carjacking which was caught by his cameras.

"It was like an action movie, terrifying," added Pilli.

The female victim says her date went into the store, and when he came out, they were ambushed.

She adds the scariest moment was being walked into the wooded area by the gas station by the men who threatened to shoot.

"It's a matter of moments. Maybe even less than 30 seconds," said Captain Robert Heinzeroth of the Northwest Detective Division.

Overall, the department has recorded 262 stolen cars and 50 attempts so far in 2022.

The male victim says the stolen car, which was a dealership loaner, was recovered in Southwest Philadelphia Saturday morning.

Authorities say anyone who sees the suspects do not approach and contact 911 immediately.