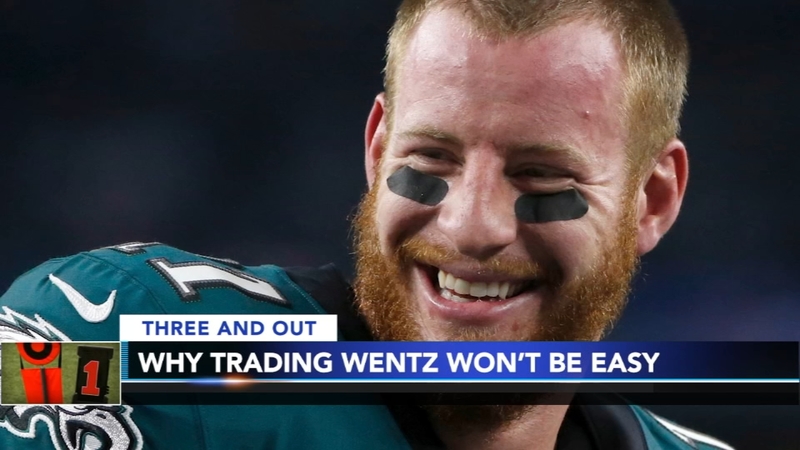 Why fans should expect Wentz and Hurts on Eagles in 2021

PHILADELPHIA -- It's been more than two weeks since the Philadelphia Eagles replaced coach Doug Pederson with Nick Sirianni, and there are no signs the team has made substantial progress in bridging the divide between it and onetime franchise quarterback Carson Wentz.

ESPN's Adam Schefter said Wednesday that Wentz "wants to leave the franchise" and a trade is still in play -- a sentiment that has been echoed by multiple sources in and around the team in the days since. Wentz has not spoken publicly since the end of the 2020 season or signaled he sees a path forward in Philadelphia, even after Pederson, who had a strained relationship with Wentz, was fired.

Adam Schefter dropped a bomb earlier today regarding Carson Wentz and the Eagles. Check out the full interview belowhttps://t.co/H0FDEsjpGV pic.twitter.com/1DrDtjG1Up

The NFL Network reported Thursday that teams have started to call the Eagles about Wentz.

From Super Bowl Live: The #Eagles are getting trade calls on QB Carson Wentz... what it means 👇🏽👇🏽👇🏽 pic.twitter.com/Crhms3jUag

The wheels are in motion. One league source said their understanding is Philadelphia has already received aggressive offers. The Eagles are looking for significant compensation in return for the 2016 No. 2 overall pick to justify losing the talent and absorbing the more than $30 million dead cap hit they'll take by trading him. Wentz was one of the NFL's worst quarterbacks statistically in 2020, and he is set to make $25.4 million in total cash next season -- third highest among QBs in 2021. Those factors will affect his value.

So there is some dancing yet to be done. But in order to avoid the drama and distraction that comes with retaining a high-profile quarterback who wants out, it's a safe bet the Eagles will work to make a deal happen, and have incentive to do so sooner rather than later before more seats get filled in the game of quarterback musical chairs.

Where might Wentz land? Here's a look at five potential suitors (Cap information via Spotrac):

2021 draft positioning: Indianapolis has the 21st and 54th overall picks

Analysis: This has long been the most logical landing spot for Wentz. Coach Frank Reich was Wentz's offensive coordinator his first two years in the league and helped him to a near-MVP campaign in 2017. Former Eagles QB coach/passing game coordinator Press Taylor is reportedly heading to Indianapolis as well, putting two of the coaches Wentz trusts most in one spot. The Colts are flush with cash and need a quarterback following Philip Rivers' retirement. It just makes sense. 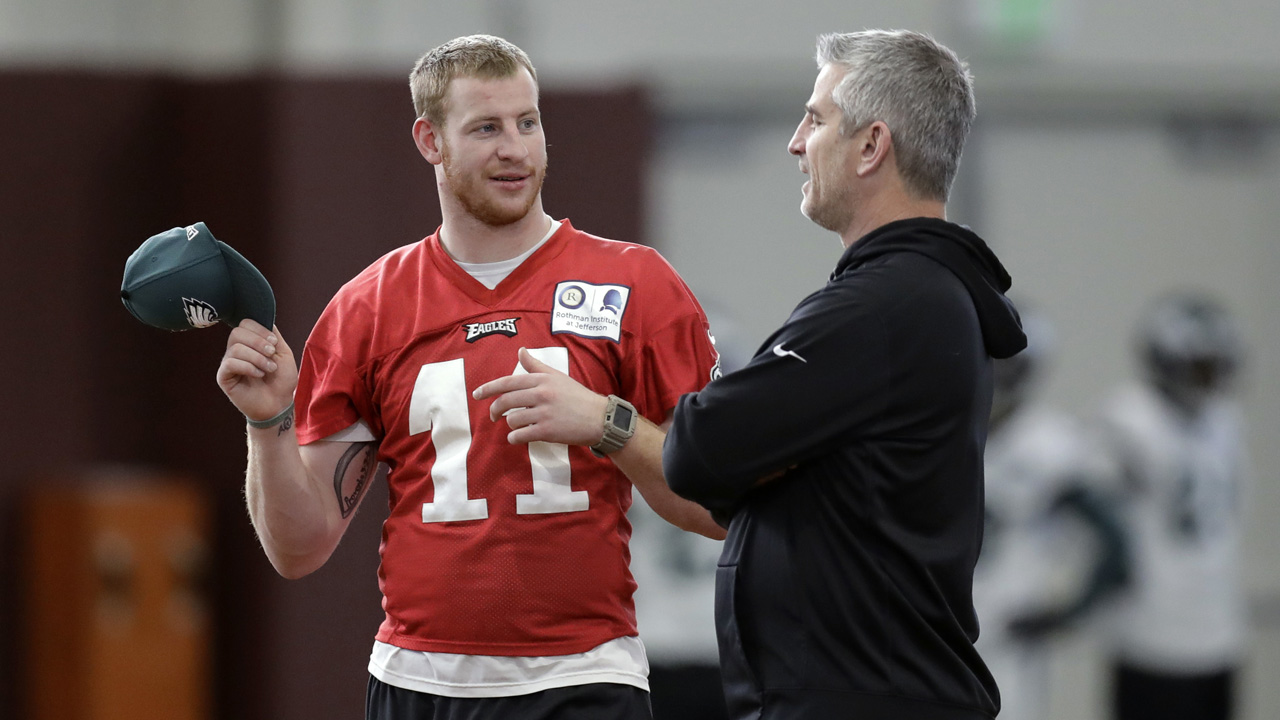 2021 draft positioning: Chicago has the 20th and 52nd overall picks

Analysis: Chicago has been in search of a franchise quarterback since the dawn of man, and that quest continues this offseason after the combination of Mitch Trubisky and Nick Foles resulted in an 8-8 campaign. Bears quarterbacks coach John DeFilippo had success with Wentz while serving in the same role for Philadelphia from 2016 to '17. He coached Wentz hard and helped keep him within the structure of the offense. Other coaches haven't had as much luck since. It could prove a fruitful and much-needed reunion. Trubisky is a pending free agent, while Foles is under contract and scheduled to make $4 million this season. Foles and Wentz, teammates again? That might be too close to the past for Wentz's liking.

2021 draft positioning: Carolina has the eighth and 39th overall picks

Analysis: The Panthers reportedly offered their first-round pick-plus for Matthew Stafford. That doesn't mean they'll do the same for Wentz, but it's at least evidence they're being aggressive in pursuit of a new signal-caller. The pairing of Wentz and up-and-coming offensive coordinator Joe Brady, who interviewed for the Eagles' head-coaching job a couple weeks back, could be an interesting melding of the minds. Teddy Bridgewater remains under contract in Carolina and is scheduled to make $17 million this season.

Analysis: The void left by Tom Brady was massive, as you'd expect. Cam Newton didn't have much to work with. He went 7-8 as a starter and threw eight touchdowns to 10 interceptions with 12 rushing touchdowns as New England finished 30th in pass yards per game (180.6). Newton is scheduled to be a free agent. This would be an incredible storyline, with Wentz trying to resurrect his career and the New England dynasty along with it. But, is he a fit for offensive coordinator Josh McDaniels and the Patriot Way? 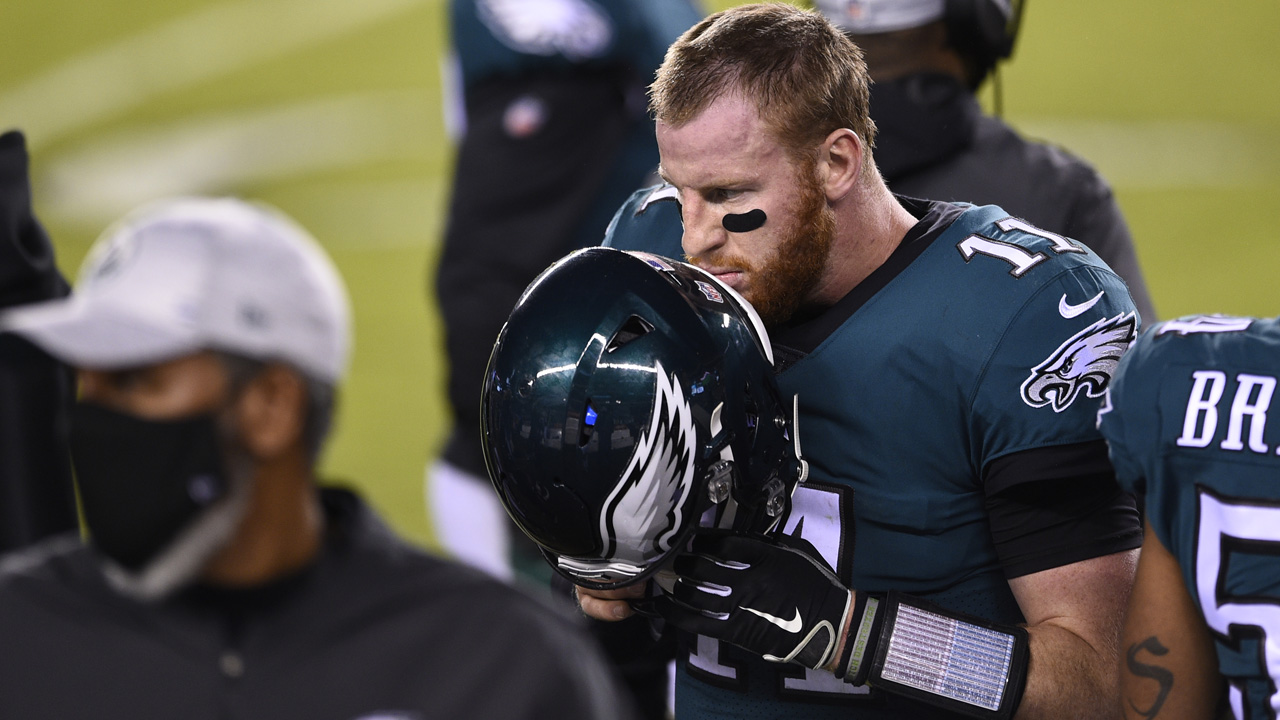 Philadelphia Eagles' Carson Wentz walks the sidelines during the second half of an NFL football game against the Seattle Seahawks, Monday, Nov. 30, 2020, in Philadelphia.

2021 draft positioning: The Texans traded their first- and second-round picks to Miami. Their first pick currently is 67th overall in the third round, but that would almost certainly change after a Deshaun Watson trade.

Analysis: If the Texans move on from Watson, they will be in the market for a quarterback. Wentz has a home in Houston, making the Texans potentially more appealing as he thinks about moving his young family. Houston's current cap situation could make Wentz's contract too big to bear, but it's at least worth exploring.

Other teams in the QB mix

Washington Football Team: Donovan McNabb was traded in the division to Washington late in his career, but would they really do that with the 28-year-old Wentz?

New York Jets: General manager Joe Douglas saw Wentz at his best firsthand when he was in Philly, and New York has plenty of cap room. But they also hold the No. 2 overall pick and might have the resources to land Watson.

Denver Broncos: The Broncos reportedly dipped their toe in the Stafford pool, but if they weren't willing to go heavy on Stafford, would they for Wentz?