Police said a car pulled into a parking spot that a food delivery driver wanted to park in, too.
WPVI
By 6abc Digital Staff and Bob Brooks 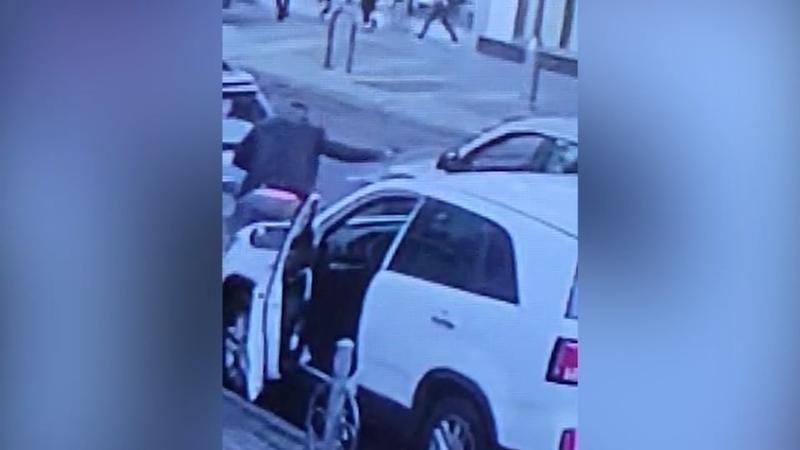 PHILADELPHIA (WPVI) -- Police say a dispute over a parking spot led to a shooting in Center City Philadelphia on Thursday afternoon.

The shooting happened in the 1700 block of Chestnut Street at about 1:50 p.m.

Police said the driver of a white car pulled into a parking spot near the intersection of 17th and Chestnut streets that a food delivery driver wanted to park in, too.

The delivery driver allegedly got out of his silver SUV and the two exchanged words.

Surveillance video shows the moment a man shot another man in Center City Philadelphia. Police said the suspect remains on the loose.

The delivery driver tried to drive off but he didn't make it far. Police say he got to the intersection of 17th and Chesnut streets because he could barely drive.

A good Samaritan then took the delivery driver to Thomas Jefferson University Hospital where he was listed in critical condition.

The shooter is still being sought by investigators.

Police are thankful no one else was injured.

"In a situation like this, he hit his intended target, but think about how many people out here with them bullets flying," said Captain John Walker.

The broad daylight shooting was one of a handful of incidents under investigation by police on Thursday.

In the city's Germantown section, four people, ranging in age from 16 to 65, were shot outside of a Rite Aid around 4:30 p.m.

They were all innocent bystanders caught in the crossfire between two gunmen who were 50 yards apart from each other.

"People need to understand when you fire these guns, things like this can happen and now you have four people impacted by this," said Walker.

Some of the victims were seriously injured, but police say all are expected to survive.

Police are still searching for the gunmen.

Four people, ranging in age from 16 to 65, were shot in the Germantown section of Philadelphia on Thursday.