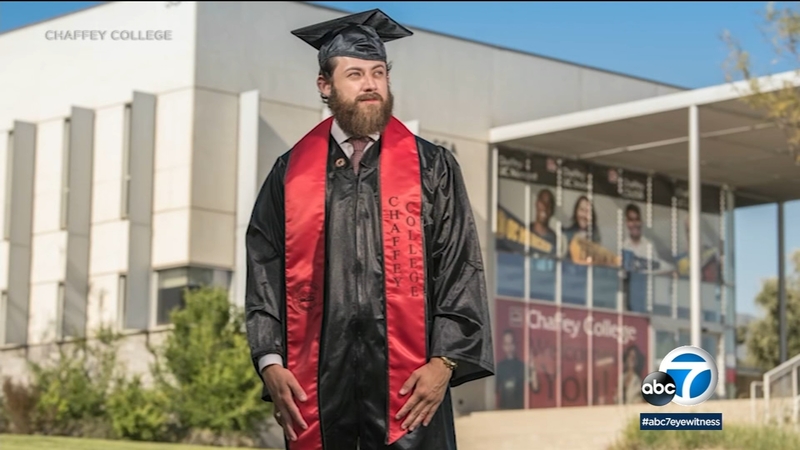 RANCHO CUCAMONGA, Calif. -- From sleeping in his truck to becoming class speaker at his college graduation, a Southern California graduate is hoping his story can inspire others to overcome the odds and chase their dreams.

Even during his darkest days in the cold, thirsty and scared, David Leon stayed in school and just earned his associate's degree in business administration at Chaffey College in Rancho Cucamonga, California.

In his speech to his fellow graduates, the 25-year-old sent a message of determination of optimism to keep moving forward, despite having the odds stacked against him during a global pandemic.

Leon says his family had to leave their home and moved away several years ago. But he vowed to stay behind and finish community college.

This week Mich Hamlin will be graduating from USC with a doctorate degree and will become a physical therapist.

"I just had the decision to live in my truck and, you know, struggle it out as a college student," he said.

Now, Leon plans to get his bachelor's degree in business administration from either San Diego or Long Beach State, both of which he has been accepted to.

He credits his family for his perseverance.

"I just looked at my past generations and I (saw) great men, including my father who worked very hard to keep me housed as child, and I just had to continue forward being a great man as best I can," he said.

Leon lost his father in March but he believes his dad smiles on him from heaven.

"My dad would say 'You could be the President of the United States one day' and I've had that since I was little so I could see myself doing something like that," he said.