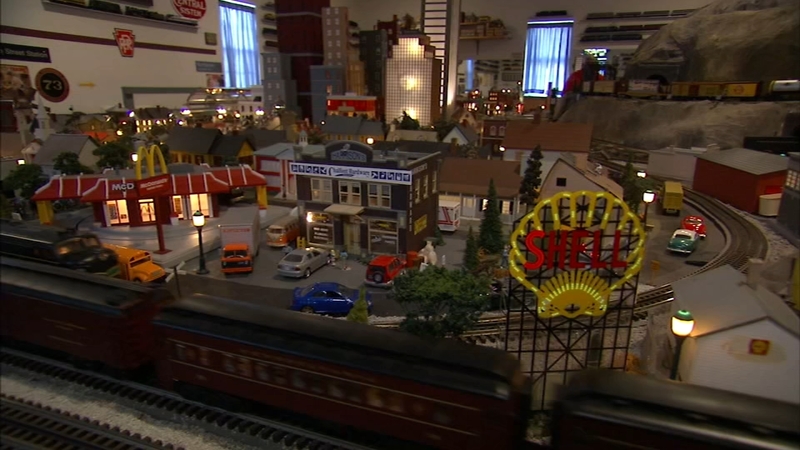 CHALFONT, Pennsylvania (WPVI) -- It can be a rare thing to find a hobby you're passionate about for a lifetime, but a 76-year-old Chalfont resident has done just that and he's been sharing it with others for the past 17 years.

If you've ever visited Phil Haile's electric train layout in Chalfont, Pennsylvania, it might seem like he's on top of the world.

"And I guess I was 12 years old when I announced to my family, that this was going to be my hobby for the rest of my life," he recalled.

Haile says it's a hobby that has spanned three generations of his family, starting with his grandfather.

"And for the Christmas of '48 my dad bought me my first train. There's a shelf with a steam locomotive and a tender," he said.

Most of his collection are Lionel, but others are MTH electric trains.

"My wife calls this my play room. I have 72 steam locomotives and and 48 diesel locomotives," he said. "I don't think I've ever left this room without being happy."

He says the idea to build what exists today came to him in ninth grade study hall.

"I called it my dream layout because I thought it would never happen," said Haile.

"He was an electrical engineer," said Haile. "I did everything that you can see. He did everything, for the most part, under the platform."

It took two years and roughly 5,000 hours to build.

"The whole idea was to have a city scene with the suburbs and then of course we wanted you have to have mountains," he said.

There's even an amusement park.

Many are local places.

"Fred Beans Ford is here. The original Doylestown hospital, which I built, is back there and a model of the original Chalfont hardware," said Haile.

But Haile also pays homage to his family.

"(The) train right here is my son's sausage company. And then also in town there's a pro shop - a golf pro shop. And then my middle son is a landscape architect. It's called Haile landscape design," he said.

He also features his hometown team.

"I just felt like I had to do something to honor the Phillies when they won the world series," said Haile.

He hosts many groups through appointment, sparking both excitement and nostalgia for all ages.

"You don't know where to look. There's just so much to see, it's just wonderful," said Marlene Clark from Doylestown, Pennsylvania.

"You leave, like he said, with a big smile. It brought back good memories from childhood," added Helen Bustard from Doylestown, Pennsylvania.

"That's what it's all about. I'm really proud of it, it's my heaven," said Haile.

Phil Haile says sadly this will be his last year. He and his wife are planning on putting their house on the market in the spring, so he said, "buy the train layout and get the house with it."
Report a correction or typo
Related topics:
health & fitnesshealthart of agingtrains
Copyright © 2022 WPVI-TV. All Rights Reserved.
TOP STORIES
AccuWeather Alert: Tracking Severe Storms Today
Retired cop who confronted gunman in Buffalo shooting hailed as 'hero'
63-year-old woman killed by driver at Jersey Shore: Police
School Closings
Find out which schools are closed in your district.
What is white replacement theory? Belief fueling racist attacks
Penn Live Arts celebrates 50th anniversary with packed lineup
Man shot while getting water ice in Philly
Show More
What we know about the victims of the Buffalo shooting
22-year-old NJ officer, recently sworn in, dies in motorcycle crash
Emotional support dogs from Cherry Hill on way to Buffalo
John Fetterman, Senate candidate, recovering after stroke
Alleged Buffalo shooter's prior threat, hospital stay face scrutiny
More TOP STORIES News