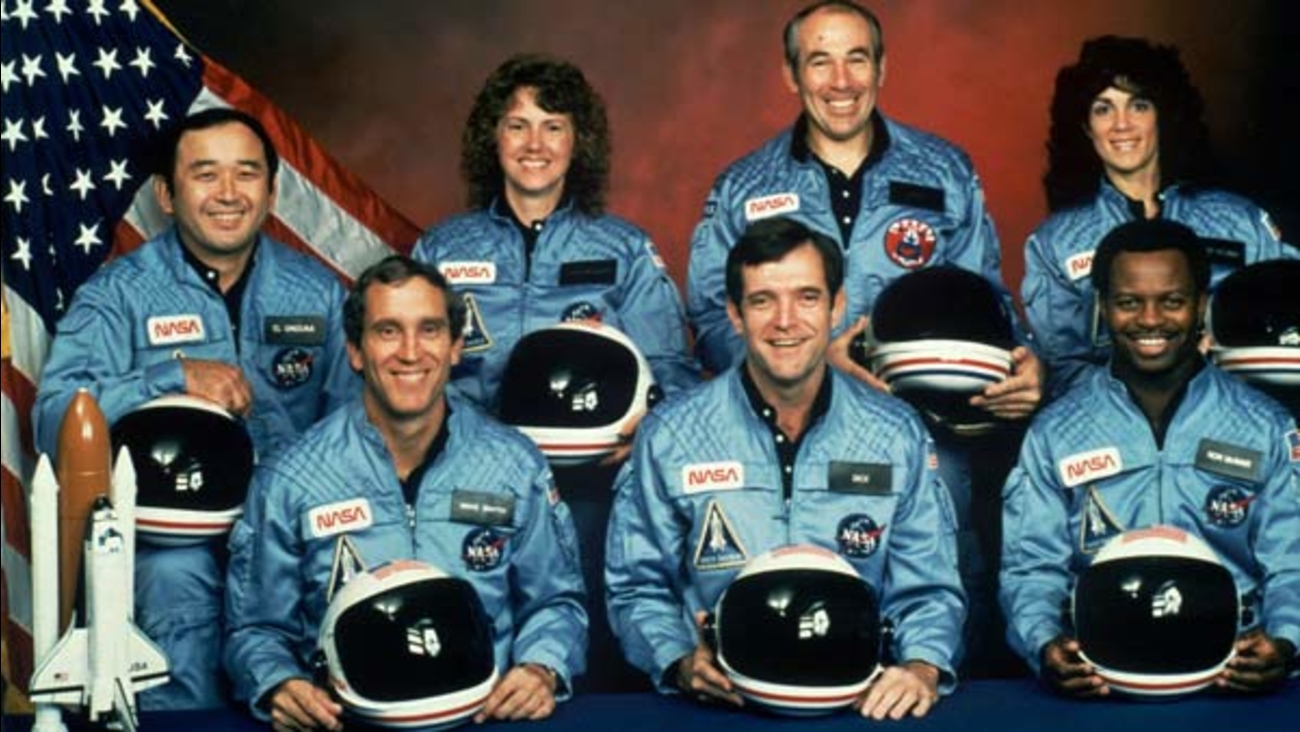 This is the official NASA photo of the crew of the Space Shuttle Challenger mission 51L. (AP Photo)

CAPE CANAVERAL, Fla. -- Dozens of educators who competed alongside Christa McAuliffe to become the first teacher in space gathered Thursday to remember the seven astronauts who perished aboard Challenger 30 years ago.

McAuliffe's son, Scott, now 39, also took part in the emotionally charged ceremony, held on a bleak, drizzly morning just six miles from where his mother's space shuttle blasted off for the final time on Jan. 28, 1986.

Many of the teacher-in-space semifinalists are retired now. They have gray hair. A few limp. But they still believe strongly in what McAuliffe hoped to accomplish aboard Challenger before disaster struck during liftoff.

"It's really hard" to be back, said William Dillon, 77, a retired teacher who represented California in the competition back in the mid-1980s. He was at Kennedy Space Center for Challenger's launch and had gotten to know not only McAuliffe, but a few of the other astronauts on the doomed flight.

Linda Preston, 61, also retired as a teacher, choked up as the names of the Challenger dead were read during the memorial service. The former space shuttle pilot reciting the names of all 24 astronauts killed in the line of duty over the years, Jon McBride, had to fight back tears.

"All of a sudden, I couldn't breathe," Preston later confided to a reporter. She represented Utah in the teacher competition.

About 40 of the 113 remaining semifinalists for teacher-in-space traveled to Cape Canaveral for the anniversary commemoration, the biggest gathering ever for a NASA memorial like this.

"We felt we all wanted to be part of it," said Connecticut semifinalist David Warner, 63, who still teaches science, robotics and rocketry.

Like so many of his colleagues, Warner wanted to see Kennedy's "Forever Remembered" exhibit that opened last summer. It contains the only piece of Challenger wreckage on public display, a 12-foot section of the left-side body panel complete with the U.S. flag, as well as personal belongings of the Challenger and Columbia crews.

The ceremony was one of several NASA memorials that took place Thursday at Arlington National Cemetery and elsewhere around the country.

At Kennedy, rain moved the ceremony indoors, directly in front of the "Forever Remembered" exhibit. The gathering took place beneath the suspended shuttle Atlantis, which in 2011 made the final shuttle flight.

Afterward, McAuliffe and other children of the Challenger dead laid a wreath at the outdoor Space Mirror Memorial. Each guest received a rose or carnation to attach to the railing in front of the massive granite mirror.

McAuliffe, who works in education technology in Maine, said having his own two sons there with him - ages 6 and 8 - made it easier. It's time, he said, that his children see and learn firsthand all about astronauts and the space program.

Indeed, in a nod to the second generation, June Scobee Rodgers - widow of Challenger commander Dick Scobee and longtime spokeswoman for the group - passed the torch to daughter Kathie Scobee Fulgham.

Fulgham - not Scobee Rodgers - was on the stage for the ceremony and introduced guest speaker Barbara Morgan, an Idaho schoolteacher who served as Christa McAuliffe's backup so long ago.

Morgan recalled how Dick Scobee was "a deep and poetic thinker," and how pilot Michael Smith let her "push the stick" during a training jet flight. She said Christa McAuliffe taught her not to worry about what's unimportant but rather work harder at what truly counts.

Up until the final day before launch, Morgan noted, Christa McAuliffe took time to write college recommendations for her students.

The crowd of about 500 included family members of astronauts killed in all three of NASA's spacecraft tragedies: Challenger; Columbia's catastrophic descent on Feb. 1, 2003; and the Apollo 1 fire on Jan. 27, 1967.

For the astronauts' loved ones, the disasters remain fresh in their minds.

Steven McAuliffe, a federal judge in Concord, New Hampshire, still declines interviews about his late wife Christa. But he noted in a statement that although 30 years have passed, "Challenger will always be an event that occurred just recently. Our thoughts and memories of Christa will always be fresh and comforting."

McAuliffe was presiding over a trial this week in Concord, and so Scott represented his father as well as his younger sister. The McAuliffes normally do not take part in these NASA memorials, so Scott's presence was especially noteworthy.

Along with the other Challenger families, Scobee Rodgers established the Challenger Center for Space Science Education just three months after the shuttle disintegrated in the Florida sky. A leak in the right booster doomed the ship; unusually cold weather that morning left Challenger's booster rockets with stiff O-ring seals.

Today, there are more than 40 Challenger Learning Centers focusing on science, technology, engineering and math, mostly in the U.S. More are being built.

"They're not just a field trip for kids. They're actually lessons learned," said Scobee Rodgers, an educator who lives in Chattanooga, Tennessee. "That's why they've lasted."