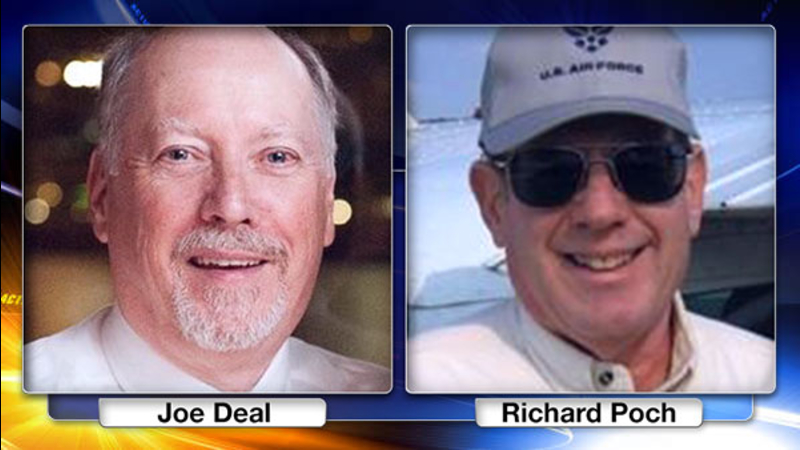 WEST GOSHEN TWP., Pa. (WPVI) -- Police have released the identities of two men who were killed over the weekend when a small plane went down just after takeoff in West Goshen Township, Chester County.

There were 2 occupants on board the plane and they have been identified as 67-year-old Richard Poch of South Five Points Road in West Chester, and 64-year-old Joseph Deal of Morgan Avenue in Drexel Hill.

The crash happened around 1:30 Sunday afternoon.

The plane had departed from the nearby Brandywine Airport and had turned south when at least one witness said he heard what sounded like the engine sputter prior to the crash.

Investigators don't know what triggered the sputtering and likely loss of power.

Brad Trapnell of West Chester witnessed the aftermath of the crash, telling us, "Me and my daughter were driving down (Route) 202, and we just saw a bunch of flames behind the retirement complex."

It wasn't a building fire, but instead a small airplane - a Piper Cherokee 140 had crashed and burned, killing both men aboard.

The intense post-crash fire could hamper their quest as it likely consumed or contaminated the fuel.

The hope is other evidence can be found, including video.

Monville says, "We have identified a facility, I'm not going to name them, that has some video footage."

The flight was what is referred to as a "check ride". The FAA requires its licensed pilots to periodically on a regular basis undergo a proficiency test.

Both Poch and Deal were qualified pilots.

This week federal investigators along with West Goshen Police detectives have been searching the crash site at the rear of a house in the 1000 block of Saunders Lane.

The question for experts is why did the roughly one ton single engine plane with two qualified pilots aboard quit flying and abruptly fall from the sky?