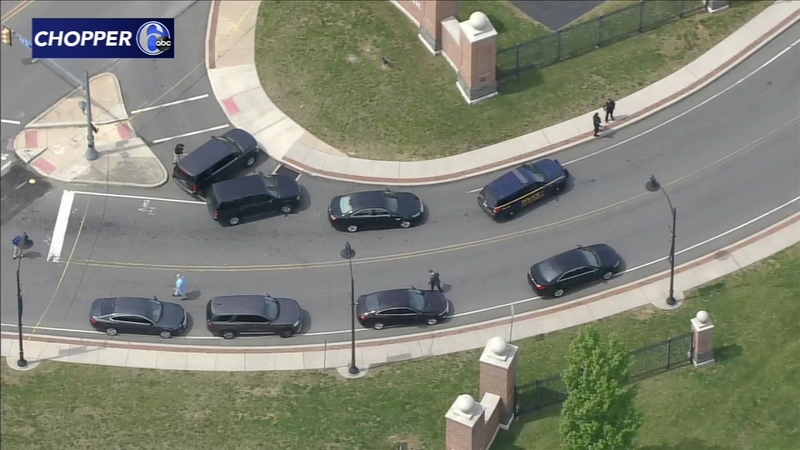 The view from Chopper 6 showed several bullet markers at the scene, as well as police searching the area.

Chester police are investigating a shooting that left a man dead Thursday afternoon.

Officials say the victim was found near the intersection of 14th and Potter streets, just steps from Widener University's campus.

"I heard gunshots a couple blocks down that way," said Widener senior Danielle Mininno, pointing towards Hyatt Street. "A car came down the street and a door was open so I thought it was weird. There was a guy hanging out with the door open screaming."

Widener University issued a statement to Action News that reads:

"Chester Police are investigating a criminal incident that occurred off our campus in the area of 14th and Potter Streets. Widener is asking the campus community to stay clear of the area so Chester Police can work. Questions about the incident should go to Chester Police Department."

Students Action News spoke with after the shooting said overall they feel safe on campus.

"At first it was a lot to take in just knowing that we're around the corner, but campus safety makes us feel a lot safer. They are patrolling all the time," said sophomore Olivia Kelly.

Freshman Devin Dexter agreed, "Of course going to school I like to feel safe. I will say that campus security do a really good job here. Walking off-campus and around the area, I haven't had issues with feeling not safe."

Violence has kept Chester authorities busy the past few days with a fatal shooting inside of a store on West 3rd Street Wednesday morning and a tow truck driver remains in critical condition after he was shot around midnight Tuesday.

The city has 11 homicides so far this year.