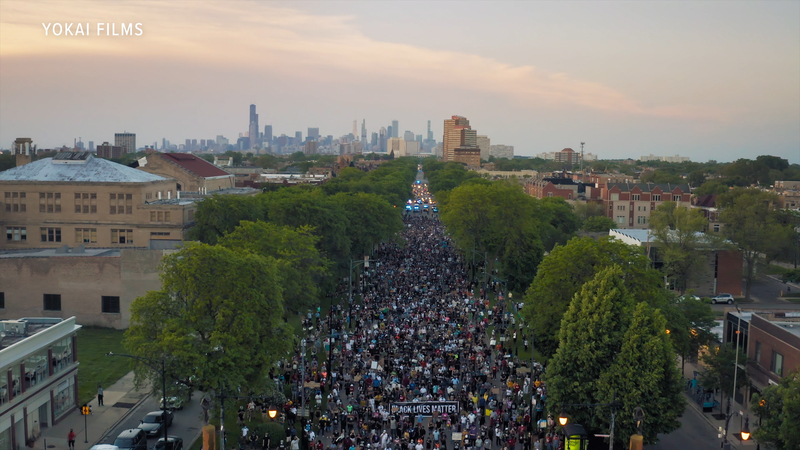 CHICAGO , Ill. -- The year 2020 can pretty much be summed up in 3 words: pandemic, politics and protests.

During the unforgettable year, Chicago activist Dom Brown organized one of the city's largest peaceful demonstrations in the midst of it all.

"On June 6, 2020, an estimated 38,000 people gathered in Union Park to protest police brutality and the brutal murders of Breonna Taylor, George Floyd and Ahmaud Arbery," Brown said. "I remember there being -- it makes me so emotional -- I remember there being 30,000 plus people behind me, and I remember growing up that my grandmother marched. I thought about my mother marching for me and for my rights and for the integrity of being Black, for the celebration of Blackness."

During the protest, local photographer Vashon Jordan Jr. snapped an image of Brown sharing an emotional embrace with another demonstrator.

"I felt the weight of the world and in that moment, when he snapped that picture, I had just broken and I began to weep," says Brown. "It wasn't that I felt powerless, it was almost like I felt the power of my ancestors being like, 'It's time to fight,' like it is time to overcome; and I lifted my head and I was like, 'My nieces and nephews will not march.' I was like, 'This ends with my generation. This stops here,' and we pressed on," Brown said.

While organizing the march, Brown knew the significance of keeping it peaceful, and he knew exactly what message he wanted to send.

"We intended on making a national statement that day and the statement needed to be that we are stronger unified. We are stronger as one unit and we are stronger peacefully. We wanted no one to have the opportunity to come at us and say, 'Oh you guys did this, but it turned violent' and anyone who was getting out of line, anyone who got close to a police officer, we made sure that they had the proper messaging," he said.

Even with the mass number of people taking to the city's streets, there were no arrests.

And after it all, Brown is still hopeful for just one thing.

"It's not even like an ultimate goal. I mean, I'm just looking for equality. It's not like this farfetched, grandiose idea. I want a fair chance and a fair shake for people of color. I'm just asking for equality and that's what the future feels like," he said.