Man dead, 5-year-old daughter hurt after jumping in front of train in Bronx 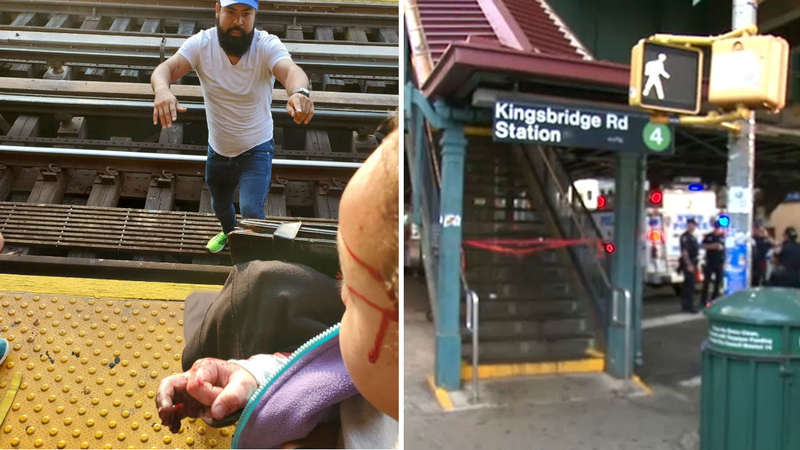 Man dead, 5-year-old daughter hurt after jumping in front of train in Bronx

KINGSBRIDGE, Bronx -- A man is dead and his 5-year-old daughter was injured after police say he jumped in front of a moving train in the Bronx while holding onto her.

The incident happened before 8 a.m. Monday at Jerome Avenue and West Kingsbridge Road.

Police say the 45-year-old man jumped onto the tracks while holding his daughter and was hit by a southbound 4 train. Medics pronounced him dead at the scene.

Sources say the child was not hit by the train. She was taken to Jacobi Medical Center to be treated for scratches.

Two other people were also treated. They may have jumped onto the tracks to help the young girl.

The train platform was packed with commuters during the morning rush. People frantically tried to wave down the train operator as he rounded the corner and pulled into the station.

But it was too late and witnesses say the man jumped onto the tracks with his little girl. Amazingly the child found a safe spot and was not seriously hurt.

Cellphone video captured good Samaritans helping the frightened child get back up onto the platform.
EMBED More News Videos

Cellphone video captured good Samaritans helping the frightened child get back up onto the platform.

The crowd and EMTs comforted the little girl before she was taken to the hospital.

Right before the man jumped, witnesses say he was on the phone and was calm.

"I heard him telling the wife that, 'You look out for the other two kids, I'm gonna take her to school,' and then he said, 'I love you,'" witness Pamela Ivy said.