'I think we've hit a wall in terms of getting people to get the vaccine,' Dr. Offit said
WPVI
By 6abc Digital Staff 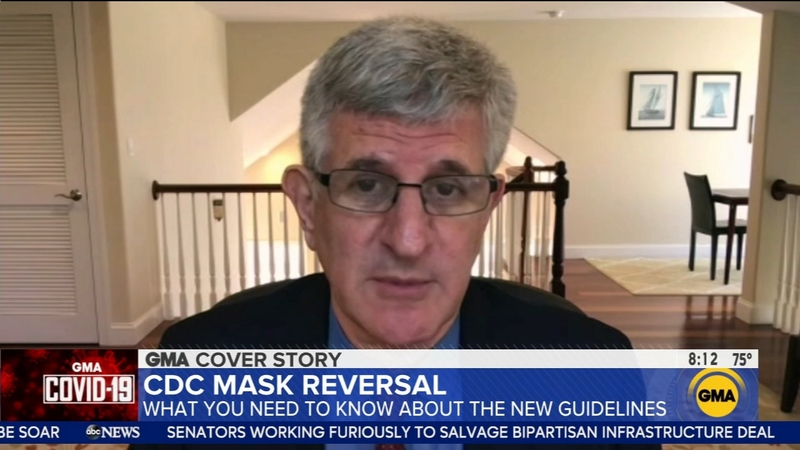 PHILADELPHIA (WPVI) -- A virus expert at Children's Hospital of Philadelphia says he expects the country to "again see more than 1,000 deaths a day" as the Delta variant continues to spread.

On Tuesday, the CDC issued a major change recommending people who are vaccinated should go back to wearing masks indoors in areas where the virus is surging.

The agency also called for everyone in K-12 schools to wear masks, even if they are vaccinated.

Dr. Paul Offit, director of The Vaccine Education Center at CHOP and a member of the FDA Vaccine Advisory Panel, spoke to "Good Morning America" on Wednesday about the Delta variant, vaccines, and mask mandates.

"The Delta variant is far more contagious than the original virus that came into this country; you shed really 1,000 times more virus from your nose and throat than the first virus that came in which killed 500,000 people," Offit said.

Offit said he was surprised over the vaccination rate in the country. He said that, along with the contagiousness of the variant, is putting the country in a position where we're taking a step back.

"We were vaccinating three million to three and a half million people a day a couple months ago; I think the assumption was we would continue to do that," Offit said. "That we would be at 80% immunization rates instead of roughly a little over 50%, in which case we wouldn't be having this discussion."

Offit said there are few things that are coming together in the next few months and not for the good. He said as we move into the fall and winter, the country will still have a highly contagious virus and a highly unvaccinated population.

"This is at its heart a winter respiratory virus," he said. "I think it's likely that we're going to again see more than 1,000 deaths a day and it's really sad because this was all preventable."

Offit said it's frustrating that people are not getting vaccinated. He called it "their ticket out of this pandemic."

"I think the conversation over the next six months is it's going to come down to mandates because I think we've hit a wall in terms of getting people to get the vaccine," Offit said.

On the same day of the CDC's updated mask guidance, two school districts in Bucks County - Central Bucks and Bensalem - announced masks would be optional for the upcoming school year.

Offit said, as kids under the age of 12 cannot be vaccinated as of yet, he would not be comfortable sending children to school unmasked.

"For a parent of a 10-year-old, knowing that you have a highly contagious virus and unvaccinated population of children less than 12 years of age in the winter months, I would only feel safe sending my child to school if I knew that there was going to be a mask mandate," Offit said.
Report a correction or typo
Related topics:
health & fitnessphiladelphiaface maskchopcovid 19 variantcovid 19 vaccinecovid 19
Copyright © 2022 WPVI-TV. All Rights Reserved.
COVID-19 VARIANT
Why some get COVID even after being vaccinated, double-boosted
FDA restricts Johnson & Johnson's COVID vaccine due to blood clot risk
Scientists discover why some are more prone to severe COVID
Americans over 50 could soon have option of getting 2nd booster shot
TOP STORIES
Officials ID 5 killed in Pottstown explosion; most were children
AccuWeather Alert: Drenching Downpours Tonight
Official admits police made 'wrong decision' in TX shooting
Police: Store owner robbed, assaulted with brick in North Philly
Dann Cuellar retires after 34 years at Action News
Another Trenton, NJ firehouse hit by gunfire
Rainy start to Memorial Day weekend at the Jersey Shore
Show More
Bank employees help kidnapped woman after she asks for loan
Massacre survivor says gunman told them: 'You're all gonna die'
4th grader 'did what she had to to survive' Uvalde shooting, aunt says
North Penn holds farewell parade for retiring superintendent
NJ students stage walkout to honor victims killed in Texas
More TOP STORIES News