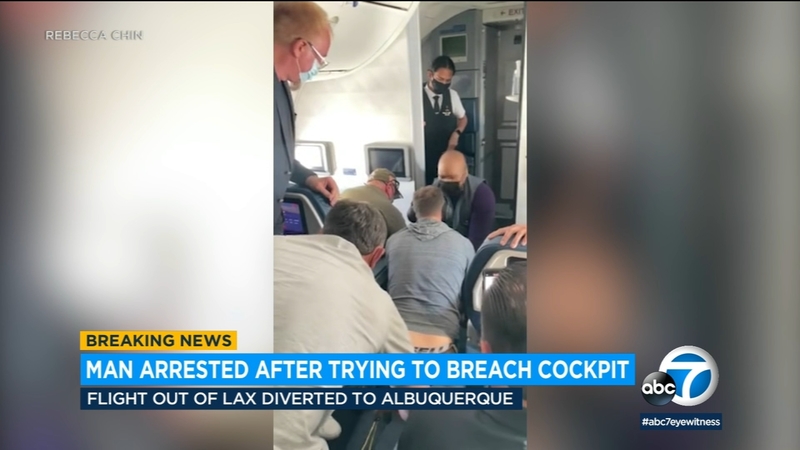 Flight from LAX diverted after man attempts to breach cockpit

LOS ANGELES -- A passenger on a Delta Airlines flight out of Los Angeles was arrested Friday after he allegedly attempted to break into the plane's cockpit mid-flight.

The airline said crew and passengers held down the man, and he was not able to breach the locked cockpit aboard Delta Air Lines Flight 386. Video taken aboard the plane shows the zip-tied and shoeless man surrounded by passengers and crew members as he repeats over and over again: "Stop this plane!"

He finally was picked up and hauled to the back of the plane.

The plane took off from LAX and was headed to Nashville, but was diverted to Albuquerque because of the incident. Delta officials say the plane landed safely and the passenger was removed by local police and the FBI.

No one was injured, and the FBI is investigating the incident.

Frank Fisher, spokesman for the FBI in Albuquerque, confirmed that the agency had responded to a report of a plane diverted to the city's airport but said there had been no threat to the public. He said no other information was immediately available.

In audio from the pilot's emergency call to air traffic control, the pilot can be heard saying the passenger had been restrained.

"Is there still a struggle going?" air traffic control asks.

"Uh, he is restrained now Delta 386," the pilot responds.

Delta says the plane has left for Nashville.