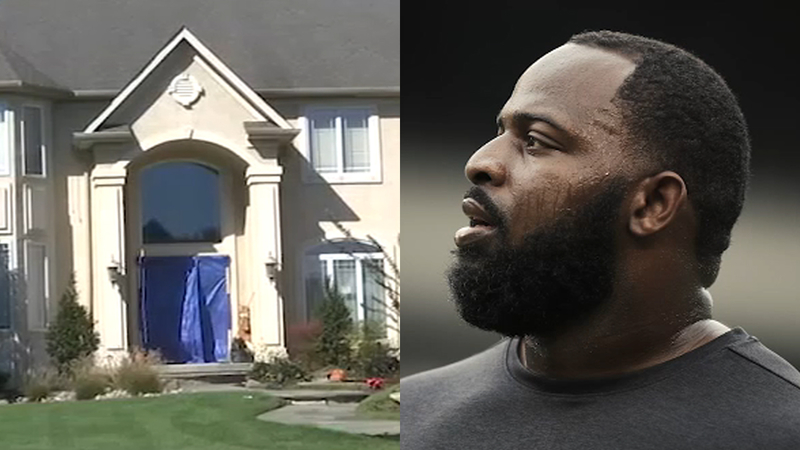 PHILADELPHIA (WPVI) -- Court documents first obtained by Action News outline the details of a violent incident that forced Philadelphia Eagles defensive tackle Fletcher Cox to grab a shotgun, forcing the suspect to flee and lead police on a pursuit.

According to court records, Corbyn Nyemah showed up at Cox's house looking for his ex-girlfriend. Nyemah allegedly damaged her vehicle before attempting to forcibly enter the home by throwing rocks through the front door.

Court records also reveal surveillance cameras at Cox's home capturing Nyemah walking around the exterior of the property with a baseball bat and attempting to enter the garage multiple times.

After Cox armed himself with a shotgun, he called police reporting a man attempting to break into his home.

Nyemah then fled in his Porsche SUV.

The Affidavit of Probable Cause says a police pursuit began but due to "erratic driving and identification of the suspect" the pursuit ended at the Commodore Barry Bridge.

Nyemah posted bond and Action News caught up with him outside his Marcus Hook, Pennsylvania home.

Nyemah wouldn’t go on camera but didn’t deny the attack. He told me most of what was detailed in court records was true. Police say surveillance outside Cox’s hom captured much of the attempted burglary. Nyemah says he wanted to talk to his ex-girlfriend who he dated for 2 yrs. pic.twitter.com/roKUWTaFcu

Action News spoke with Nyemah but he wouldn't comment about specifics but said much of what is in the criminal complaint is true.

He said he wanted to talk to his ex-girlfriend and believed they were working on rekindling their romance.

The Philadelphia Eagles say the safety of its players is of the utmost importance. They say they are calling this a private matter.

"We look into and obviously the police get involved, and really from that standpoint, I can't do anything other than hear the results of the investigation," said coach Doug Pederson.

Pederson says Cox didn't attend practice on the day following the incident but says it's unrelated to the alleged crime.

He says the team will look into whether Cox needs additional security outside of the NovaCare Complex.

A temporary restraining order has been granted for Nyemah's former girlfriend.

He allegedly sent her a photo by text while brandishing a firearm after the police pursuit.