Fall COVID-19 surge has arrived in Pennsylvania and US, health experts say

Gov. Wolf told Pennsylvania residents to stay vigilant and stay together on the fight against COVID-19.
WPVI
By Maggie Kent, Katherine Scott and CNN Wire 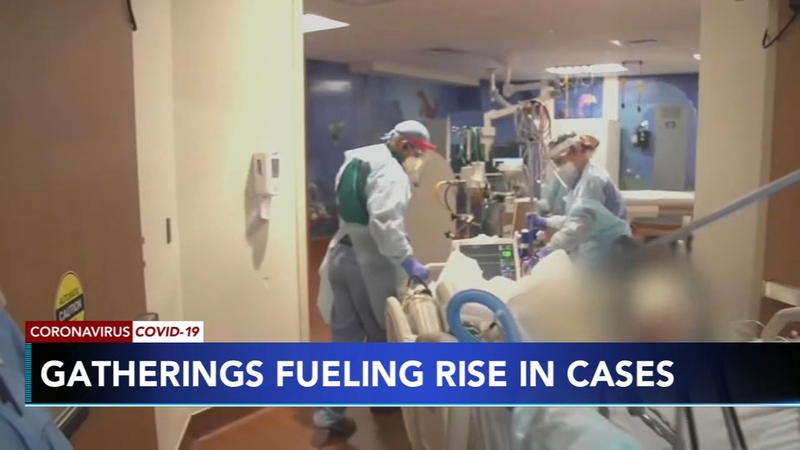 COVID-19 cases continue to soar across the country and one top infectious disease expert warned Americans that the next few months will be the "darkest of the pandemic."

Health experts say the predicted fall surge is here, and rising cases across the US appear to bear that out. The US is averaging more than 55,000 new cases a day, and 10 states reported its highest single-day case counts on Friday. At least 27 states, including New Jersey and Pennsylvania, are showing an upward trend in the number of cases reported, according to a CNN analysis of data from Johns Hopkins University.

"The next six to 12 weeks are going to be the darkest of the entire pandemic," Michael Osterholm, director of the Center for Infectious Disease Research and Policy at the University of Minnesota, told NBC's"Meet the Press" on Sunday.

The number of daily COVID cases are on the rise in Pennsylvania, Gov. Wolf says.

Osterholm highlighted the 70,000 cases of Covid-19 reported on Friday, which matched the largest number seen during the peak of the pandemic. Between now and the holidays, the US will see numbers "much, much larger than even the 67 to 75,000 cases," he said.

Governor Tom Wolf on Monday told Pennsylvania residents to stay vigilant and stay together on the fight against COVID-19.

Governor Wolf says now is really the time to double down on the efforts to keep ourselves and the people around us safe.

Despite the climbing totals, Dr. Anthony Fauci, the nation's top infectious disease doctor, said a nationwide lockdown is not the way forward unless the pandemic gets "really, really bad."

"No, but shut down away and say, 'We're going to use public health measures to help us safely get to where we want to go,'" he said during an interview on CBS' "60 Minutes" Sunday night.

Instead of seeing restrictions as a roadblock to an open economy, Fauci said the fatigued American public should see public health measures as a way to safely keep it open.

On Monday, CNN medical analyst Dr. Celine Gounder said Americans must follow those public health measures, especially wearing masks, if they want to avoid a repeat of the spring.

"If we don't take this seriously now, we are going to find ourselves in a very difficult position in just weeks to maybe a month or so," Gounder told CNN's John King. "Many of us in the health field are really steeling ourselves because we know what it was like back in March and April. Many of us have, frankly, PTSD from that experience and are very nervous about what we're about to face, again, not having learned the lessons of that."

Osterholm, however, said the lack of a coordinated government response is hampering efforts to stem the pandemic.

"So, what we have right now is a major problem in messaging," he said. "People don't know what to believe, and that's one of our huge challenges going forward, is we've got to get the message to the public that reflects the science and reflects reality."

As of Monday, there were more than 8.1 million cases and 219,765 coronavirus deaths in the US, according to data from Johns Hopkins University.

Coronavirus numbers in Pennsylvania are now mirroring those seen in late April. New statewide infection rates have eclipsed 1,000 per day for the last two weeks straight.

In Monday's press conference, Governor Tom Wolf did not indicate that these numbers would lead to any further restrictions on activities. An epidemiologist Action News spoke to says now is the time to start making those decisions for yourself and your family.

"With such a rapid increase we're concerned about case counts doubling in the coming weeks," said Dr. Carolyn Cannuscio, Associate Professor of Family Medicine and Community Health at the Hospital of the University of Pennsylvania said.

All sections of Pennsylvania are seeing a rise in coronavirus infections, following the trends in much of the nation.

COVID hospitalizations in the state nearly doubled from this time last month from 422 in late September to 881 in late October.

"We expect these numbers to continue to increase, as hospitalizations normally rise a few weeks after an increase in cases," said Health Commissioner Dr. Rachel Levine.

Dr. Cannuscio says while October's infection rates look like April's, our behavior has drastically relaxed since then, which could lead to an even higher infection wave.

"People are out and about, people are sharing time with friends, people are visiting restaurants, and when numbers were high in April we were being super cautious as a community. We were still on lockdown. Everybody was scared," said Dr. Cannuscio.

Her message to the public, "I want people to wake up and realize that today is the day they must start taking this very seriously. There is not another moment to wait."

Dr. Cannuscio says now is the time to reconsider any unnecessary trips out of the house, to avoid possible exposure.

Fauci looks to the FDA for vaccine safety

Public health measures will need to remain in place at least until a safe and effective vaccine is available.

But Fauci, the director of the National Institute of Allergy and Infectious Diseases, said on Monday that it may be a challenge to get people to take the vaccine.

"It would be a terrible shame if we have -- and I think we will have -- a safe and effective vaccine but we're not able to widely distribute it to those who need it," Fauci said during a virtual event for the National Academy of Medicine on Monday.

When one is made available, Fauci said on Sunday that he will take it after looking at the data and if it has been approved by the US Food and Drug Administration.

"I'm going to look at the data upon which the FDA makes that decision. I trust the permanent professionals in the FDA," Fauci said in the "60 Minutes" interview.

But Osterholm said that vaccines won't be available "in any meaningful way" until the third quarter of next year and even when they are, half the US population is skeptical of even taking one.

The vaccine development process has stirred controversy as politicians have called for one to be released quickly, prompting some to question if the politicization of the issue will affect the safety and efficacy of a possible vaccine. But many health experts have said that the agencies in charge will hold to high vaccine standards.

"The commissioner of the FDA has been very public that he will not let politics interfere. We have an advisory committee to the FDA who are made up of independent people who I trust," Fauci said. "Put all those things together, if the final outcome is that the FDA approves it, I will take it."

In an open letter published Friday by Pfizer Chairman and CEO Albert Bourla, the company said it plans to apply for emergency use authorization from the FDA for its Covid-19 vaccine as early as the third week of November.

But first, Bourla wrote, the vaccine should prove to be safe and effective in preventing the disease and can be consistently manufactured to high-quality standards.

Once a vaccine is approved in the US, CVS and Walgreens pharmacies have been designated to help distribute free vaccines to long-term care facilities, federal officials confirmed.

Florida reports more than 2,000 cases a day for almost a week

New coronavirus cases have been climbing across nearly all of the country over the last week.

Florida's daily case count has remained above 2,000 for 6 days in a row, CNN's tally shows.

Over the weekend the significant surge in case counts continued, with counts reaching levels not seen since the middle of the summer surge. Sunday had 48,210 new cases nationwide, which is the second most reported cases for a Sunday since July 26.

The seven-day average of new cases has climbed above 56,000, a level not seen in the past 12 weeks, and is 14% higher week over week, according to John Hopkins data.

Over the past two weeks, Chicago has been averaging 500 new cases daily, Mayor Lori Lightfoot said Monday. The city had one day of over 800 new cases, which was the largest single-day number since May 21, she said.

Contact tracing revealed 2 out of 3 Chicagoans who tested positive for Covid-19 contracted the virus from someone they know, according to Dr. Allison Arwady, the Chicago's health commissioner.

"This is the second surge that Dr. Fauci and Dr. Arwady has been warning us about since March," Lightfoot said. "We are now in it."