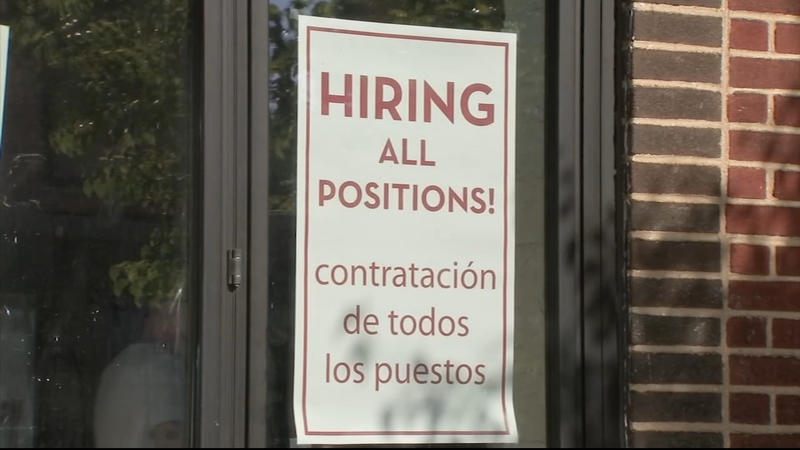 Small businesses across region continue to struggle to fill jobs

HADDONFIELD, New Jersey (WPVI) -- It is one of the unexpected developments of the last stages of the pandemic.

Even though there are about eight million fewer jobs than before COVID-19 crashed the economy, many employers are having a tough time hiring workers.

Ian Whitfield immigrated to the United States from Britain in 2003.

He says he has been working 70 to 80 hours a week trying to make a living running the British Chip Shop, a restaurant he co-owns in Haddonfield, New Jersey.

But a year after the pandemic, he says he can't find enough workers because enhanced federal unemployment benefits of $300 a week exceed what they would be making at their job.

SIGNING BONUSES: New hires are being offered everything from hundreds of dollars in bonuses, classes to further their education and more are employers look for badly-needed help.

"Getting them off the sofa and out of the house when they're already being subsidized at home, where is the incentive for that?" asked Whitfield.

The owners of Mare Monte, an Italian restaurant, are also having to compete with the enhanced unemployment benefits.

"The unemployment benefits have destroyed the restaurants," said chef and co-owner Gentina Mataj.

But other businesses are also struggling to find workers.

Ben O'Rourke and Alyssa Casey have been trying to run a small clothing store in Haddonfield all by themselves.

"I mean we're even talking about what to do on weekends, and if we can't be here just for prior engagements like we will have to close if we don't find help," said Casey.

CEO Ben Johnson is looking for help at his software and data analytics consulting firm, Freya Systems in Media. He has now had to expand his search nationwide.

"I think in the long term, we have a very definitive shortage of a high tech skilled workforce," said Johnson.

"The bill that we're talking about would actually accelerate that and hopefully, as soon as it would get to the governor's desk, he can sign it into law," said Republican State Senator Scott Martin from District 13 in Lancaster County.