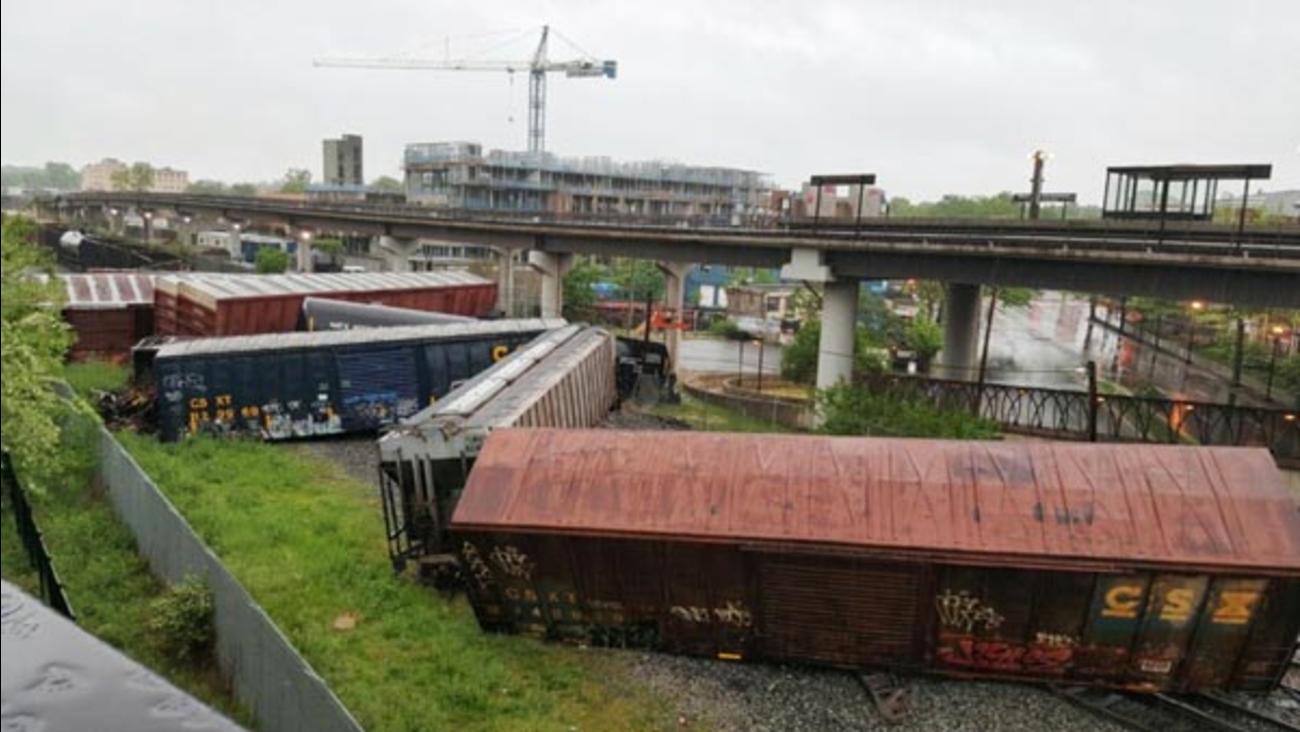 Several cars remain overturned after a CSX freight train derailed in Washington on Sunday, May 1, 2016. (DC Fire and EMS via AP)

WASHINGTON -- A CSX freight train heading to North Carolina derailed near a Metro stop in Washington, D.C., on Sunday, sending 14 cars off the tracks and spilling hazardous material, officials said.

No injuries were reported and no evacuations were ordered.

The train derailed about 6:40 a.m. near the Rhode Island Avenue Metro station and one of the cars leaked sodium hydroxide, which is used to produce various household products including paper, soap and detergents, CSX spokeswoman Kristin Seay said.

Sodium hydroxide, also known as corrosive lye, is a chemical that can irritate and burn the skin and eyes.

CSX said hours later the leak was plugged. Mayor Muriel Bowser said at an earlier news conference that officials were not sure how much spilled.

"The fumes should not cause you any problems and you should not be able to smell them anywhere else," said D.C. Fire and EMS Deputy Chief John Donnelly.

Officials found that another derailed car had been leaking non-hazardous calcium chloride, CSX said. That leak has also been plugged, the company said.

A third car was slowly leaking ethanol from the base of a valve, the company said. Officials worked to re-seal the valve, and the spilled the ethanol has been contained.

CSX said it will now focus its attention on cleanup efforts.

It was not immediately clear what caused the derailment of the train, which was heading to Hamlet, North Carolina, from Cumberland, Maryland.

Crews were inspecting the tracks, which are used by CSX, the MARC commuter rail system and Amtrak. The Metro tracks are above and adjacent to the derailment site.

Photos tweeted by D.C. Fire and Emergency showed cars in a zigzag line across the tracks.

Chris Nellum said he lives nearby and his window looks directly over the tracks.

"I thought it was like a semi-truck coming toward the building and when I looked out the window, I saw cars piling up," said Nellum, who had just moved in the night before. "So I'm not even used to hearing trains. It was jarring."

Nellum said his girlfriend tried to leave the area and was told to stay put, but she eventually found a way out.

"She's an environmentalist so she is very concerned about whatever is leaking," he said.

The part of Rhode Island Avenue that was temporarily closed in both directions was reopened Sunday afternoon.

The Red Line's Rhode Island Station was also closed and Metro was reporting delays along that line. Metro said it would establish bus shuttle service between the NoMa and Brookland stations.

The CSX train had three locomotives and 175 cars, including 94 that were loaded with mixed freight, and 81 that were empty.