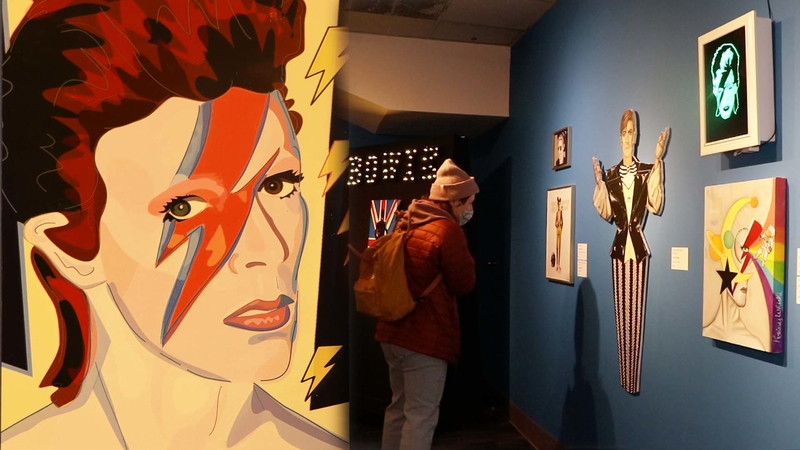 PHILADELPHIA, Pennsylvania (WPVI) -- "David Bowie always represented the ability to be unique, express yourself, appreciate who you are, and to be able to reinvent yourself," said Robert Drake. "He always has been the poster child for, and the beacon of light for, all those misfits who've kind of been lost over the years."

Drake is a longtime Bowie fan and co-organizer of "Philly Loves Bowie Week," a series of charitable celebrations in memory of the iconic singer-songwriter. The fifth annual tradition comes six years after Bowie's passing.

Despite hailing from London, Bowie had a strong relationship with the City of Brotherly Love. Inspired by the Philadelphia Sound pioneered by local artists, Bowie shaped his own sound in the city over the years.

In the 1970s, he famously recorded "David Live" at the Tower Theater in Upper Darby. Later, he returned to Philadelphia to record his "Young Americans" album at Sigma Sound Studios. There, he befriended a group of loyal fans who would come to be known as the Sigma Kids. Some members of the original fan group created "Philly Loves Bowie Week" in 2017.

"We would turn these events and activities into a fundraising tool for the David Bowie Fund, which benefits the Cancer Center at Children's Hospital of Philadelphia," said Drake. "And so far, we've been able to raise over $50,000 towards that fund."

This year, the ongoing COVID-19 pandemic has forced the organization to postpone many of its live events to the spring. However, one part of the celebration kicked off today.

"Deconstructing Bowie: Freedom in Eccentricity" is the latest exhibit at the National Liberty Museum. From now until March, guests will be able to explore a colorful room full of artwork produced by mostly local artists. Each piece is inspired by the message self-expression perpetuated by Bowie and his many personas.

"This museum has evolved over the past 20 years, looking at the concept of liberty and what that means in our society today," said CFO & COO Alaine Arnott. "It's music, it's individuality, it's freedom of expression. And you can see that in the exhibition that we have out right now through a partnership with Philly Loves Bowie Week."

Amanda Gallant of Fishtown was one of the first visitors to step inside.

"It's a bit emotional. This is a special exhibit," she said. "I'm a big fan, went to a whole bunch of concerts when I was younger. So it's really intriguing."

Much of the artwork is labeled with a price tag. At the end of the exhibit, each piece will be sold with a portion of the proceeds benefiting Children's Hospital of Philadelphia.

To learn more about Philly Loves Bowie Week and their upcoming events throughout the year, visit their website.

Maxayn Gooden was brought to tears by the portrait of her son, who was murdered as a teenager.