"I knew there was going to be a response when word got out about this a couple of weeks ago, but it has been more than I thought."
WPVI 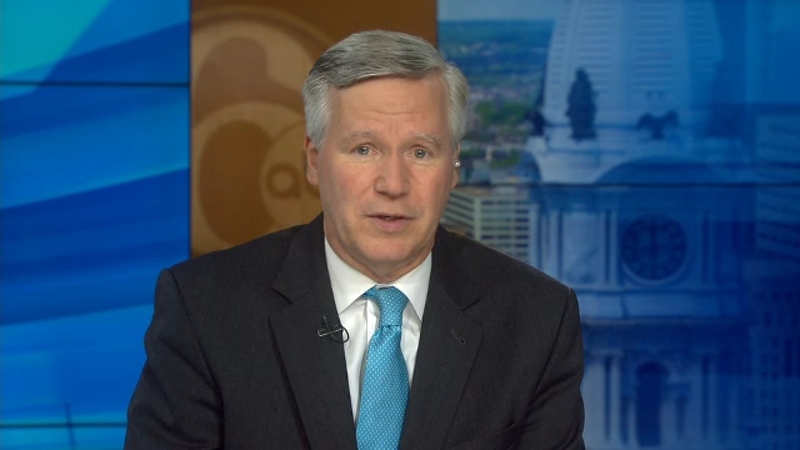 David Murphy signs off after 31 years with Action News

News of his retirement was announced last month, and David said the reaction from viewers has been incredible.

"I have been overwhelmed by the response. I knew there was going to be a response when word got out about this a couple of weeks ago, but it has been more than I thought," he said. "A lot of you had really heartfelt, from the heart statements to make and things that you've told me about how not only me - but us - have made a difference in your lives."

"You've done everything for me and made this career possible by just continuing to tune in and being so loyal," he continued. "So all my love and thanks to all of you."

He earned Seals of Approval from both the American Meteorological Society and the National Weather Association, and holds a Certificate in Broadcast Meteorology from Mississippi State University.

"David Murphy has been part of the bedrock of Action News for decades, and his many contributions have been extremely important to our success as the leader in news and weather in the Delaware Valley," said Bernie Prazenica, president and general manager of 6abc. "However, the best contribution David has made is to show all of us how a true gentleman conducts himself on and off the air. We will miss David as a colleague and friend, and wish him and his family all the best."

I’m pretty sure this is our first promo pic together as the new Action News morning team. That was about 16 years ago.
Today is @davidmurphy6abc ‘s last day on the air. Watch 6abc and help us say goodbye to our treasured friend.@TamEdwards6abc @karenrogers6abc @MattPellman pic.twitter.com/eYRViDumSN

"I was lucky enough to work at several great TV stations early in my career, but the entire time, my wife and I couldn't stop thinking about coming home to Philadelphia," reflected Murphy. "Channel 6 was the only station I seriously pursued. I knew this was the newscast everybody watched, and I wanted to have a lengthy career at the station."

Memorable news assignments include the Oklahoma City Federal Building bombing and the attacks against the World Trade Center in 1993 and 2001.

"From news reporting to weather, it's been a blast. The icing on the cake was being a part of such a talented, tight-knit morning anchor team with Matt, Tam, Karen and traffic reporter Matt Pellman, who have kept me laughing for the past 17 years and have joined me in serving our amazing Action News viewers, who I will also miss! But after 37 years in broadcasting, I have decided that I am an excellent candidate to exit from working life," said Murphy.

Prior to joining Action News, Murphy was a reporter with WJZ-TV, Baltimore, Maryland; WMAR-TV, Baltimore, Maryland; WNEP-TV Wilkes-Barre/Scranton, Pennsylvania; and with WFMZ-TV in Allentown, Pennsylvania.
Murphy is a graduate of Temple University, Philadelphia, where he received a Bachelor of Arts degree in communications. In 1984, he was the first Temple University student to win a national scholarship from the Radio-Television News Directors Association. In 1998, he was honored by his alma mater with an introduction into the Klein College Alumni Hall of Fame. Murphy also holds other prestigious honors, including several United Press International Awards for reporting while in Allentown, Pennsylvania.

Murphy and his wife, Barbara, have three children and reside in suburban Philadelphia. He enjoys traveling with his family. He is involved with several local charities including annual fundraising efforts for the Parkinson Council and the Pancreatic Cancer Action Network. He is also a longtime Phillies fan and can often be spotted with family and friends at the ballpark.