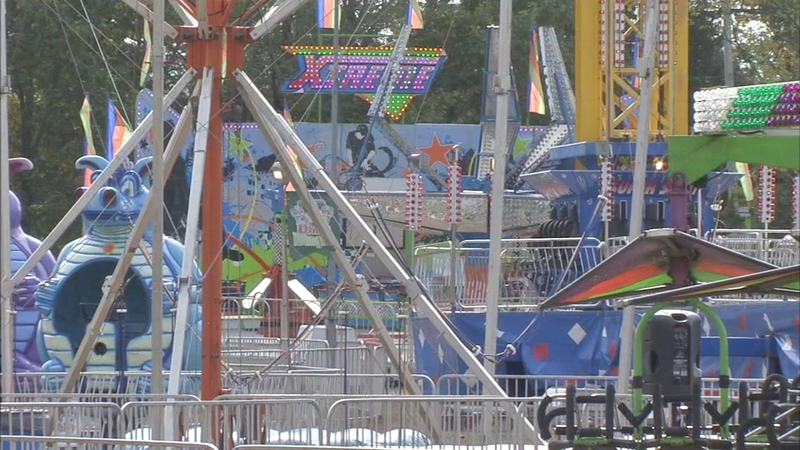 Girl, 10, dies after falling off ride at New Jersey festival

DEERFIELD TOWNSHIP, New Jersey (WPVI) -- Officials said a 10-year-old girl has died after she fell off a ride at the Deerfield Township Harvest Festival Saturday night.

New Jersey State Police said the girl fell off the ride at about 6 p.m.

According to a witness, the girl fell off the "Xtreme" ride.

The witness said the child was motionless at the scene and was taken by medical helicopter to the hospital.

"I have a seven year old and just seeing the little girl it's so heartbreaking," said Jessica Estrada Plasencia. "You would think your kids would be safe...I know you ride at your own risk, but they are there to make sure your kids are secure, to make sure kids aren't going to fall off a ride."

Girl injured on ride at festival in Deerfield Township: as seen on Action News Mornings, October 13, 2019

Witnesses said family members of the child appeared to be distraught.

Many families demanded that the fair be shut down for the evening after the incident.

According to the website for the event, the amusement rides and games area would be closed on Sunday and all other scheduled events at the festival would continue as planned.

The girl was taken to Cooper University Health Care following the incident. But shortly after her arrival there the girl was pronounced dead.

The company that owns and operates the ride is Skelly's Amusement Company. An inspector came to inspect every ride Sunday morning to ensure safety they never opened.

"Even though we have been given permission to operate the other rides by the state, we don't have it in our heart. We continue to ask for your thoughts and prayers for the family," said a statement on the company's Facebook page.
Report a correction or typo
Related topics:
deerfield townshipchildrenhospitalchildren injuriescarnival
Copyright © 2022 WPVI-TV. All Rights Reserved.
CHILDREN INJURIES
Video shows babies being rescued from rubble after deadly KY tornado
4 children struck by car in Delaware
Actors honored for rescuing 14-year-old trapped under SUV in NYC
New report lists top most dangerous toys for kids this holiday season
TOP STORIES
AccuWeather Alert: Snowy Thursday Morning Commute
Police: Gunman arrested after holding teen hostage during standoff
Woman beaten to death with 2 pipes inside office building
School Closings
Find out which schools are closed in your district.
Woman stuck in bathroom for days gets saved by neighbor
Check School Closings and Delays
Watch NatGeo documentary 'The First Wave' free for 48 hours
Show More
PennDOT ready for another round of snow
Embiid ties career high with 50 points, 76ers beat Magic
Voting bill collapses, Democrats unable to change filibuster
2 dead, 3 firefighters injured in South Jersey crash
Philly officials announce increase of violence prevention resources
More TOP STORIES News