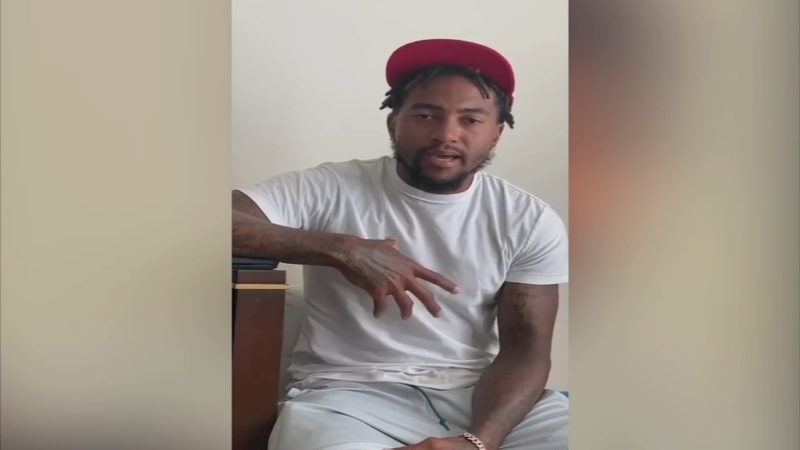 PHILADELPHIA (WPVI) -- DeSean Jackson apologized Tuesday on social media after he posted offensive, anti-Semitic comments on Instagram over the weekend.

His initial post highlighted the text of a fake Hitler quote stating black people are the "real children of Israel" and white Jewish people were against people of color.

The criticism began pouring in on social media.

The Eagles released a statement saying in part, "the messages he shared were offensive, harmful and absolutely appalling ... and are not condoned or supported in any way by the organization."

In his Instagram video Tuesday, Jackson said in part, "I want to first off extend an apology on behalf of me and what I stand for because I'm one that's fair and I don't want to put any race or people down. My post was definitely not intended for anybody of any race to feel any type of way especially the Jewish community. I posted what I posted, I definitely didn't mean it to the extent you guys took it. I probably shouldn't have posted anything Hitler did because Hitler was a bad person and I know that. I was just trying to uplift African Americans and slavery and you know enlighten my people. On behalf of myself I just wanted to apologize I didn't intend any harm or hatred or towards any people."

Michael Henderson of North Philadelphia said, "He shouldn't have done it in the first place."

"I think he was trying to be genuine, but I think it's easy to say stuff and not really mean it," added Kristen Pary.

The airwaves of 97.5 have been buzzing about what the team should do next.

Tyrone Johnson, co-host of Sixers Outsiders says, "A suspension seems to be a sweet spot in between doing nothing, which is what they've done in the past, and outright releasing him, which some people warrant, but I don't think will happen."

Shira Goodman, regional director of the Anti Defamation League, said, "It's really important when something like this happens, especially an influencer with somebody with such a platform, that they take responsibility that they acknowledge and apologize and commit to do better."

In talking about Jackson's video apology, Goodman said, "The statement below his video is a clear concise statement against anti-Semitism and hatred and acknowledging what he did wrong. The video itself he rambles a little bit he talks about not wanting to offend anyone, not having hatred for anybody knowing what he did was wrong and hurtful."

Although the Hitler quote is known to be fake, Goodman said, "In what realm is it ok to quote Hitler, to quote something so divisive and anti-Semitic and blaming the Jews for problems of blacks when we're at a time people are trying to come together?"

Late Tuesday several local Jewish organizations came together with The ADL and released this statement:

"ADL, AJC, the Jewish Federation of Greater Philadelphia, the Jewish Federation of Southern New Jersey, the Philadelphia Holocaust Remembrance Foundation and the Pennsylvania Jewish Coalition strongly condemned Eagles wide receiver DeSean Jackson's antisemitic social media posts promoting notorious anti-Semite, Louis Farrakhan, and a quote falsely attributed to Adolf Hitler. Although Mr. Jackson later posted that he 'has no hate in his heart,' his amplification of hate-filled messages sent a very different message. We commend the Eagles organization for speaking out forcefully against the posts and urging Mr. Jackson to apologize. We appreciate Mr. Jackson's apology and his removal of the offensive posts, and we hope that he will take this opportunity to work with the Jewish community and become educated about how dangerous and pernicious antisemitism and all forms of hate are.

All of the undersigned organizations work in coalitions in our community, foster interfaith and Black-Jewish dialogues, and support all efforts to ensure Philadelphia is safe and welcoming for all. We are willing to work with the Eagles and Mr. Jackson on education and outreach.
The Eagles have been a unifying force in our City. We hope they will remain so."