The bill would allow parents to sue schools or teachers who engage in the restricted topics.
WPVI
By TaRhonda Thomas 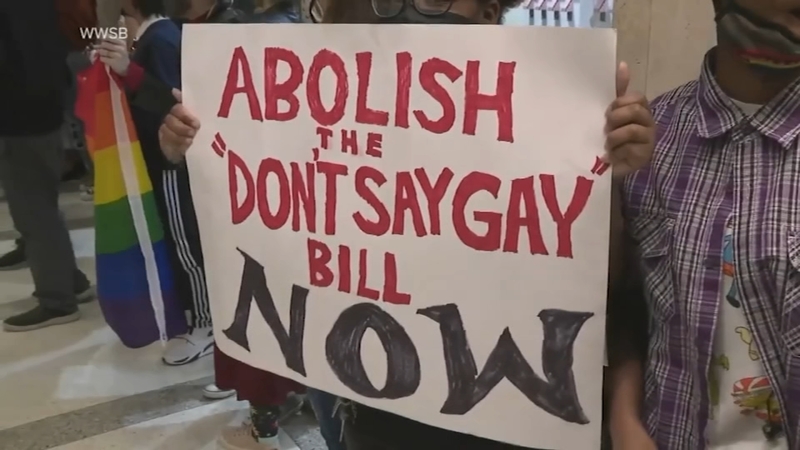 On Tuesday, the state passed a law that's creating ripple effects more than a thousand miles away in Pennsylvania.

"These bills are just steeped in hate," said Burroughs, who is a board member with the nonprofit Philadelphia Family Pride. The group focuses on issues affecting LGBTQ+ families.

"(This bill) is one that we think politicians should consider," said Geer, who is president of the nonprofit Pennsylvania Family Institute, which focuses on conservative issues affecting families.

The Parental Rights in Education bill limits what teachers in kindergarten through third grade can teach about sexual orientation and gender identity.

The legislation states that such lessons "may not occur in kindergarten through grade 3, or in a manner that is not age-appropriate or developmentally appropriate for students in accordance with state standards."

The bill would allow parents to sue schools or teachers who engage in the restricted topics.

Critics have nicknamed the legislation the "Don't Say Gay" bill because they are fearful of the conversations it could be stopping.

"It brings that level of fear and shame that we have really been trying to counteract," Burroughs.

He and his husband have a son. He's worried that the bill would stop classroom discussions on LGBTQ+ families like his.

"If there's an assignment that's asking kids to talk about their families and they have two dads, do you not show that student's work?" asked Burroughs.

"This doesn't prevent conversations," responded Geer when posed with that same question. "If you look at the language of the bill, it's not preventing that kind of thing at all. It's talking about lessons on those things."

Geer supports the legislation, saying it's about parental choice.

"What that bill really does is grants parents their wishes, which is to not have young children, kindergarten through third grade, presented with materials in the classroom talking about sexual orientation and gender identity," he said.

But Burroughs, who also is a former kindergarten teacher, says the law will stifle teachers and students.

Geer maintains that the bill is more about the curriculum that teachers choose rather than what students say.

Both Geer and Burroughs think similar bills could be on the horizon in Pennsylvania.

"Many parents find (instruction on LGBTQ+ issues) troubling, and that's why I think bills like this that passed in Florida are being considered in many other places," said Geer.

"Other (states) can see this as templates for them to follow to continue to preach hate, and quite frankly it's just anti-educational," said Burroughs.

The Biden administration has denounced the bill, which will now head to the desk of Florida Governor Ron DeSantis for his signature.

As protests against the legislation continue, both Geer and Burrows will continue to watch what happens next and what impact it could have in Pennsylvania.