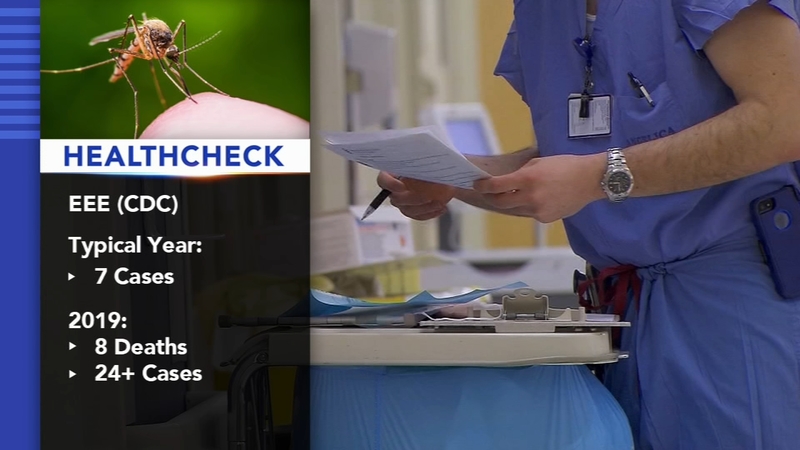 PHILADELPHIA (WPVI) -- It may be officially fall, but don't put away the bug spray just yet.

A potentially deadly mosquito-borne virus has arrived in Pennsylvania.

Eastern equine encephalitis, also known as EEE or Triple-E, has been confirmed in mosquitoes in Carbon and Monroe counties, just north of the Allentown-Bethlehem-Easton area, and in Erie County.

It's already sickened three people in New Jersey, in Atlantic, Somerset, and Union counties, and caused more than a dozen horses to be put down.

In early August, Delaware said EEE was detected in sentinel chickens in all three counties.

Elsewhere in the U.S., EEE's toll has been devastating, with New England hardest hit.

Massachusetts has had three human deaths and 10 cases, while Connecticut and Rhode Island have had one death each, and at least half a dozen cases

The virus is carried by birds. When a mosquito bites an infected bird, it can spread the virus to humans, horses, and other birds.

EEE is rare, and when most people get it, symptoms are mild, similar to the flu.

But it can cause a life-threatening swelling of the brain, with a 33% fatality rate.

Symptoms develop three to 10 days after being bitten.

Public health officials are urging people to guard against mosquito bites after more cases of a rare mosquito-borne virus, including two additional deaths in southwestern Michigan.

The best protection is to prevent mosquito bite by taking steps to eliminate standing water around your home.

-Have roof gutters cleaned annually, particularly if leaves from nearby trees have a tendency to clog the drains.

-Turn over plastic wading pools and wheelbarrows when not in use.

-Do not let water stagnate in bird baths.

-Aerate ornamental pools or stock them with fish.

-Use landscaping to eliminate standing water that collects on your property.