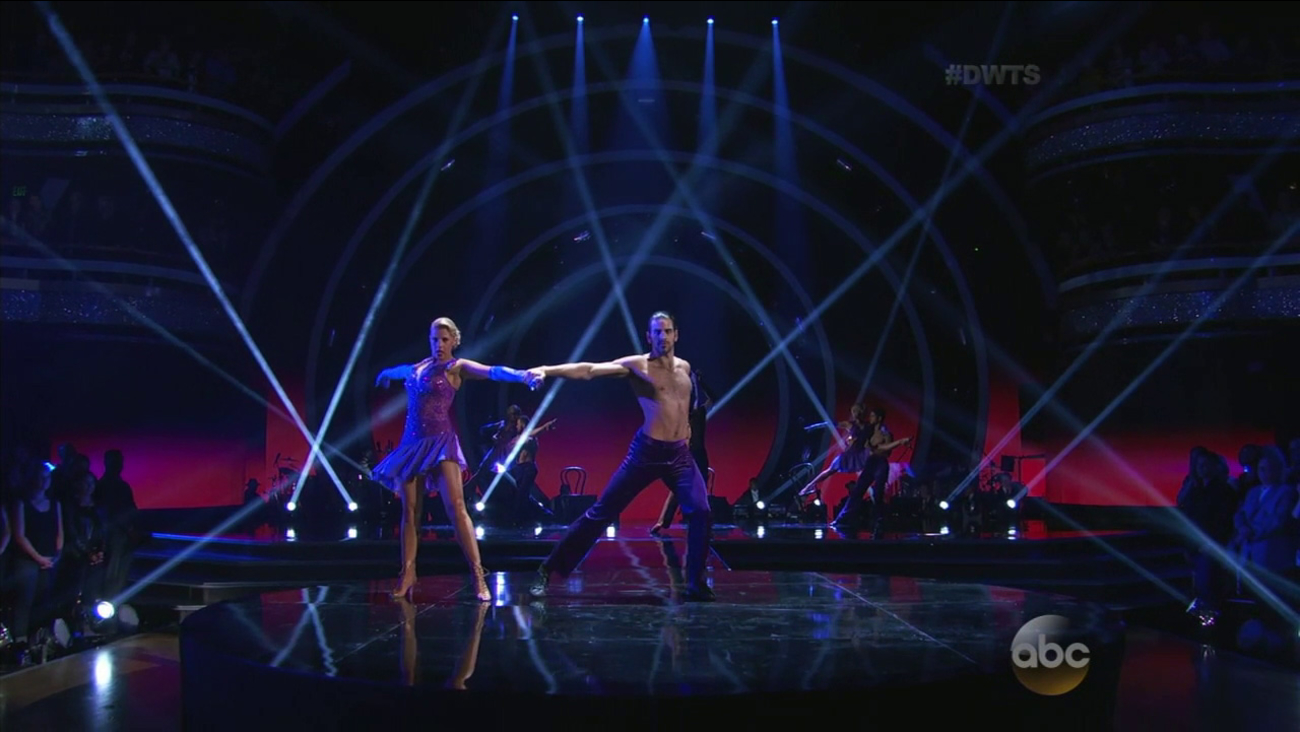 The scores were closer than ever in week eight of 'Dancing with the Stars' as one couple is eliminated and the final five were revealed.

LOS ANGELES -- The new round of competition for week eight of "Dancing with the Stars" has been dubbed the "Judges Team-Up Challenge." Each judge was assigned two couples to their team and the judge was in charge of creative concept, choreography and costumes.

This was after each of the six remaining couples performed another routine. And America got to vote in the Team-Up!

Here's a recap of the night's dances, from highest score to lowest:

Jodie Sweetin - 30 out of 30
The couple keeps moving up, and up, and up with their talent and connection. But producers address the internet rumor issues that say Keo is keeping Jodie down, down, down. He feels bad; she said she doesn't give a "hoot." The headline controversy sparks Keo to come up with his best choreography yet. They do a big church revival themed production with plenty of super-fast moving jive. The judges are all smiles when the routine is finished. Head judge Len Goodman told Jodie throughout the season she has grown and flown, and no dance this season has made him feel happier. Carrie Ann Inaba called this their best dance yet; and Bruno Tonioli thought the routine was an inspired tour de force.

Ginger Zee - 30 out of 30
Ginger and Val have two weeks of perfection! They challenged themselves after last week's triple 10s and pulled out all the stops for their Argentine tango. Ginger had to really work on the "drama" part of the dance as she likes to smile! Ginger said she just watched what Val did and that got her into character. Len loved the light and shade of what he called "one helluva dance." Carrie Ann called it "mind-blowingly" good and thought they were dancing as one and Bruno revealed he is now smitten with Ginger and praised their work as partners.

Nyle DiMarco - 29 out of 30
With great risk comes great reward, and Peta and Nyle took a big risk this week. During their powerful paso doble, Peta choreographed one segment with Nyle and several male members of the troupe. And no music. Nyle wanted to invite people into his world so this "sound of silence" segment was born. It resonated in the ballroom not just with fans but also the judges and host Erin Andrews. Both Carrie Ann and Bruno gave Nyle a perfect 10. Carrie Ann said the dance touched her profoundly and Bruno thinks the routine will become a DWTS classic. Len picked apart a few bits, but praised Nyle's confidence.

Paige VanZant - 28 out of 30
Mark Ballas loves to push boundaries and Paige seems to be his perfect muse. He has a "Frozen" meets "Game of Thrones" theme for their Viennese waltz. Bruno called it thrilling, chilling, and admired their risk-taking. Carrie Ann was also impressed with the concept, and the execution. Len gave Paige probably his biggest compliment - he called her a real dancer.

Antonio Brown - 27 out of 30
This football star knows from his "real" job that the more practice you put in, the better you'll be. He knows the triple 8s he earned last week aren't good enough for the semi-finals so he actually beat Sharna to the rehearsal hall a few days this week so he could practice, practice, practice. Antonio got the steps down pretty easily; the hardest thing for him seemed to be the name of the dance. He kept calling it the "Vietnamese" waltz instead of the "Viennese" waltz. Bruno called him dashing, classy and romantic. Carrie Ann thought Antonio showed her an elegant expression of his soul and thanked him for taking the notes the judges have given him. Len was also happy they spent time rehearsing the footwork.

Wanya Morris - 25 out of 30
Wanya just has the best attitude. He's happy to learn any and every dance and is thrilled that he's dropped many pounds while strengthening his core to boot. Lindsay's routine for their jive is very fast and with a cowboy theme. They even get past an accidental pop to her mouth during rehearsal (what's a little blood?). The duo fell out of step a time or two. Carrie Ann called the dance a rough ride, while Len praised him for coming out guns blazing. Bruno liked the kicks and jumps, but thinks maybe Wanya's overabundance of energy is what gets him out of sync.

PHOTOS: "Dancing With The Stars" quarter-finals

Team Bruno: Jodie and Nyle
Bruno's concept involved a super sexy Argentine tango and he's having everybody dance with everybody: girls together, guys together, celebs together - and anything goes! Len loved the concept and the execution. Carrie Ann thought the partnering was engaging, impressive and totally in sync. Both judges gave the team a 10 while America's vote was a 9.

Team Len: Ginger and Wanya
Len turns the ballroom into the Caribbean for a lighthearted samba. For the first time, the celebs got to see the fun side of Len, and they like it! Carrie Ann praised their teamwork and Bruno called the dance "samba-licious." Again, both judges gave a 10 while America gave it a 9.

Team Carrie Ann: Paige and Antonio
Carrie Ann's crew pits the two pro athletes together and her paso doble choreography takes full advantage of that. The key word is power. Bruno loved the physicality and thought every move was impactful and emotional. Len thought the routine showed great imagination and the routine was full of purpose. Both judges gave a 10 and once again, America gave it a 9.

Over the course of the show, we learned Nyle, Paige and Ginger were safe while Jodie, Antonio and Wanya were in jeopardy. Tom calls out that Antonio was safe, which left Jodie and Wanya in the bottom two.

Eliminated this week: Jodie and Keo.

Up Next: Five couples return for the semi-finals on Monday, May 16.
Related topics:
arts & entertainmentdanceabcdancing with the starsreality televisionballroom dancing
Copyright © 2020 WPVI-TV. All Rights Reserved.
More Videos
From CNN Newsource affiliates
TOP STORIES