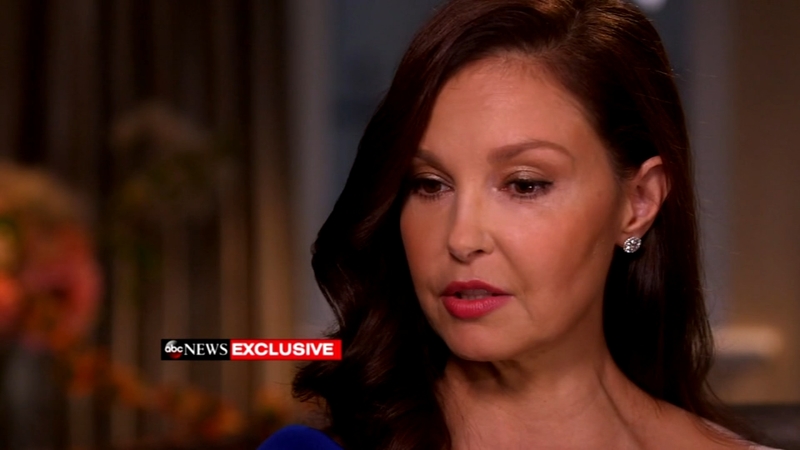 When actress and activist Ashley Judd was debating whether to come forward with allegations that movie producer Harvey Weinstein had sexually harassed her, she had no idea whether anyone would care about or believe her accusations or similar ones from dozens of other women.

"I'm very blessed to be here," Judd told Sawyer in her first television interview about her Weinstein allegations. "I made the most important decision I'll ever make years ago, which is to turn my will and my life over to the care of a loving God, and it was like, 'I'm so taken care of. I'm totally going to do this,'"

Judd said she also talked with her parents about going forward, and she said her mother, singer Naomi Judd, told her to "go get him."

"Perpetrators are shameless," Ashley Judd said. "And they put their toxic shame onto their victims, which we then internalize and carry around with us."

Judd, 49, is one of more than 60 women who have come forward with allegations of sexual misconduct against the movie mogul. Nearly 20 women allege the misconduct occurred in the late '90s around the same time Judd said she had an inappropriate encounter with him. Judd's coming forward helped spark a conversation and an online campaign called, #MeToo, in which people used the hashtag to reveal they had been victims of sexual assault and sexual harassment, was shared millions of times on social media.

"Some of my friends have come forward, and some of them have not," Judd said. "We have more #MeToo's to help liberate others."

"I'm very sorry for Gwyneth," Judd said. "I am delighted that she came forward. I think it's incredibly powerful she did. At the time, I didn't know that I knew anything."

Weinstein has denied all allegations. A spokesperson for the movie executive told The New Yorker: "Any allegations of non-consensual sex are unequivocally denied by Mr. Weinstein."

"Mr. Weinstein has further confirmed that there were never any acts of retaliation against any women for refusing his advances. Mr. Weinstein obviously can't speak to anonymous allegations, but with respect to any women who have made allegations on the record, Mr. Weinstein believes that all of these relationships were consensual," according to the full statement from Weinstein's spokesperson. "Mr. Weinstein has begun counseling, has listened to the community and is pursuing a better path. Mr. Weinstein is hoping that, if he makes enough progress, he will be given a second chance."

Twenty years ago, the Kentucky native was a young actress filming the movie "Kiss the Girls" when she said Weinstein invited her to a Beverly Hills hotel for a business meeting.

"I had a business appointment which is as-- that's, you know, his pattern of sexual predation. That was how he rolled," she said.

But when she got there, she said Weinstein, now 65, had her sent up to his room.

At the time, Judd said, she had already experienced sexual predation. She has written about being sexually assaulted as a young girl and the terror of feeling trapped during such situations.

When she got to Weinstein's room, Judd said Weinstein asked to give her a massage and then asked for her to give him one, she added.

She said he steered her into a hallway near a closet and asked her to pick out his suit to wear for the day.

"I have totally frozen in my mind the floor plan... and where the door was behind me, and then eventually where that closet was," she said.

Judd said she wouldn't sit down, but remained standing as she cowered in the hall for a few minutes. At one point, she said Weinstein asked her to come into the bathroom and watch him take a shower.

Exasperated, Judd said she offered a sort of deal to Weinstein to get him to back off so she could leave.

"He kept coming back at me with all this other stuff," she said. "And finally I just said, 'When I win an Oscar in one of your movies, OK?' And he was like, 'Yeah, when you get nominated.' I said, 'No, when I win an Oscar.' And then I just fled.'"

After she left Weinstein's hotel room, Judd said she told her parents some details about what had happened said they could see she was visibly shaken. She said she also told agents and others who worked in Hollywood, but no action was taken.

"I knew it was disgusting," she said. "And if I could go back retrospectively with a magic wand and say ... 'I wish I could prevent it for anyone always.' And, no, I don't know that I would have been believed. And who was I to tell?"

At the time, Judd said, she didn't feel powerful enough to come forward. She recalled once sitting at a table with a few other actresses in the late-1990s and Weinstein walked by.

Judd said she was at a dinner event in 1999 when she decided to confront Weinstein. She said Weinstein was talking to her and said, "'Remember that little agreement we made? Think I've got that script for you.'"

"He was across from me at a table, and... I had come into my own. I had come into my power. I had found my voice, and I was coming right at him," she said. "And he looked at me, across the table... and he said, 'You know, Ashley, I'm going to let you out of that little agreement we made.'"

"And then I said, 'You do that Harvey, you do that.' And he has spat my name at me ever since."

In the wake of the allegations, Weinstein was terminated by the board of the Weinstein Company and later resigned from the board of directors. He was also expelled by the Academy of Motion Picture Arts and Sciences.

After Judd came forward, Weinstein released a photo of him and Judd holding hands at a Vanity Fair Oscar Party, but Judd said the photo shows a terrified woman.

"I hoped I wouldn't pass him, but I did and he, obviously, grabbed my hand," she said. "It's like the look on my face is abject terror. I can see it in my eyes."

Looking back what happened, Judd said that part of her feels ashamed that she didn't say "no" at the start and part of her is proud of herself for getting out of that situation.

"We all do the best we can, and our best is good enough," Judd added. "And it's really OK to have responded however we responded."

Judd said she wasn't sure if she could ever confront Weinstein again. When asked if she thought he belonged in jail, Judd said, "If he's a rapist, he absolutely should go to jail."

"I believe that there is hope and help for everyone. It has to be the appropriate help. And there has to be a real, profound understanding on the part of the sexual predator that what they were doing was wrong and criminal."

She has turned to her faith to find peace.

"When I spoke at the United Nations on the modern slave trade, I said my prayers beforehand," she said. "I actually prayed last week and I said, 'Dear God, in case I forget to pray, please let this be the prayer.'"

What she would say to Weinstein today, she said, "is, 'I love you and I understand that you are sick and suffering, and there is help for a guy like you, too, and it's entirely up to you to get that help."

Judd said this is just the kind of person she is.