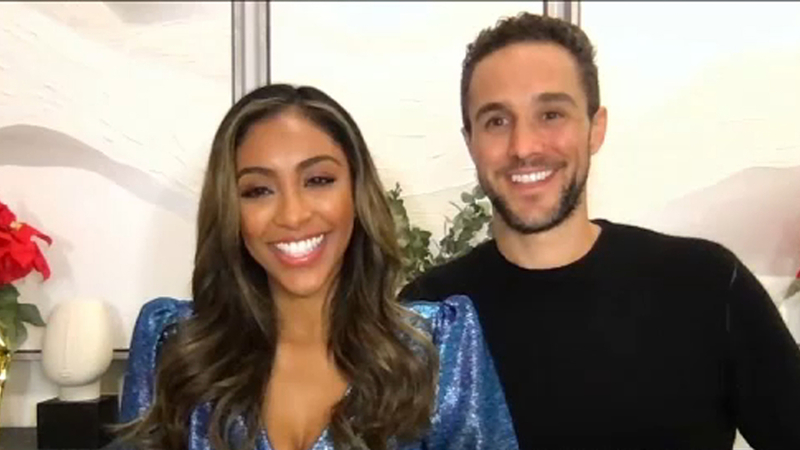 Tayshia and Zac talk about their engagement on 'GMA'

NEW YORK -- So where are Tayshia and Zac now? They are still engaged and enjoying dating each other.

The happy couple appeared on "Good Morning America" Wednesday morning, the morning after the big "Bachelorette" finale aired. It was one of the first seasons to not feature an "After the Final Rose" special. Host Chris Harrison said it wasn't possible to bring people back due to the pandemic.

But as for that proposal... "It was a whirlwind," Tayshia said. "It was really beautiful to watch back."

"The beautiful thing is that the reasons I fell in love with her are all still true today," Zac said.

Filming wrapped a few months ago, but they both said it was a tad easier to keep their relationship a secret because not as many people are out looking for them due to the pandemic, and Zac noted that wearing face masks has helped.

So what's next for this happy couple? "We're going with the flow," Tayshia said. "We're dating each other."

Zac said, "I want to take you out and do all of those things." But when it comes to their future wedding he added that he wants a big wedding when the day comes, but he'll make sure she gets whatever she wants.

For now, the couple remains bicoastal with her in California and he in New York, but they are spending Christmas in New York together.

He's been hitting up Pinterest for long-distance date ideas and as for pet names for each other, we heard it when they made their body painting on the show the other night, "Clarkie and the Queen."

As for pet peeves, she thinks Zac pauses when he talks a bit too much, and he says she's "never finished a beverage in her life." Hilarious!

In a separate interview later Wednesday, Zac revealed that he didn't know that the final two guys usually both head to the proposal location.

Jennifer Matarese interviews Tayshia and Zac about their lives after "The Bachelorette."

"I had no idea they send two guys out on that last day!" Zac said, "But I had to trust my gut that we had a good thing going."

As for the ring, "He did good!" Tayshia said in approval of the emerald-cut Neil Lane engagement ring.

Will this be the last we see of these two? Hopefully not! Tayshia said she loves dancing, so she's definitely open to being on "Dancing with the Stars" someday! "The rest of the field wouldn't stand a chance," Zac said.

The next season of "The Bachelor" begins with Matt James on January 4 on ABC!