National Geographic gives an exclusive look at the wreck of Endurance, which has not been seen since it sank in 1915.
CNNWire 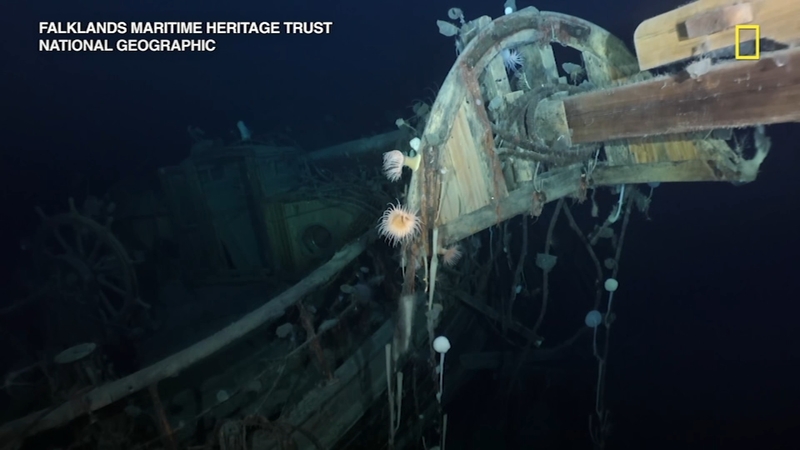 More than a century after it sank off the coast of Antarctica, polar explorer Ernest Shackleton's ship HMS Endurance has been located, apparently intact and in good condition.

The ship, which sank in 1915, is 3,008 meters (1.9 miles or 9,842 feet) deep in the Weddell Sea, a pocket in the Southern Ocean along the northern coast of Antarctica, south of the Falkland Islands.

The discovery was a collaboration between the Falklands Maritime Heritage Trust and History Hit, the content platform co-founded by historian Dan Snow.

"This is by far the finest wooden shipwreck I have ever seen. It is upright, well proud of the seabed, intact, and in a brilliant state of preservation," Mensun Bound, director of exploration, said in a statement.

He added: "This is a milestone in polar history."

Irish-British explorer Shackleton had a longtime obsession with the South Pole and set off on a total of four expeditions toward the White Continent.

Endurance departed from the UK in 1914 and reached Antarctica's McMurdo Sound the following year on a journey called the the Imperial Trans-Antarctic Expedition.

However, due to the extreme conditions, the ship got stuck amid thick, impenetrable ice in the Weddell Sea. The 28 men on board, including Shackleton himself, abandoned the Endurance and set up rudimentary camp facilities on board ice floes that were floating northward.

ABC's Amy Robach has more on the historic discovery of Ernest Shackleton's ship HMS Endurance which was found in Antarctica 107 years after it sank.

Eventually, the team made it to the uninhabited Elephant Island, then some -- including Shackleton -- volunteered to get in a lifeboat and head toward South Georgia Island, finally crossing it on foot to reach Stromness whaling station, which was then manned by the Norwegians, and organize a rescue of the men left behind on Elephant Island.

Although the expedition was a failure, the team's survival and eventual rescue months later, without any loss of life, was seen as a triumph of their tenacity and the incredible leadership skills of Shackleton.

Following another expedition later in his life, Shackleton died on South Georgia Island in 1922, at the age of 47, and is buried there.

How was Endurance found?

After being abandoned, Endurance eventually sank into the Weddell Sea, where she has been ever since.

Its resting place is about four miles south of where Captain Frank Worsley, a New Zealander who helmed the ship, had believed it to be.

On board were a mixed group including scientists, historians and filmmakers who were capturing footage for an upcoming National Geographic documentary about the journey to locate Endurance.

Once they were close to where they believed the shipwreck was, explorers used Sabertooth hybrid underwater search vehicles made by Saab to locate her.

As per the guidelines of the Antarctic Treaty -- which was signed by 12 countries in 1959 and is the closest thing to a constitution for the southernmost continent -- Endurance will not be moved or taken apart.

Instead, she will remain where she is and be studied, mapped and photographed there.

While Shackleton's name and biography are still famous around the world, the Endurance22 mission is as focused on the future as the past.

Dr. John Shears, the expedition leader, said, "We have also conducted an unprecedented educational outreach program, with live broadcasting from on board, allowing new generations from around the world to engage with Endurance22 and become inspired by the amazing stories of polar exploration, and what human beings can achieve and the obstacles they can overcome when they work together."