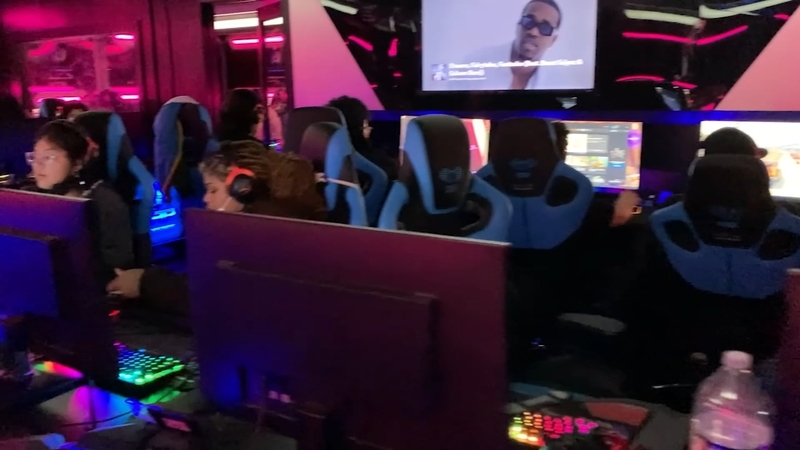 PHILADELPHIA (WPVI) -- With its spaceship-like decorative lights and designs, walking into Tap Esports in Philadelphia's Chinatown section is almost like entering into a virtual world.

"Some of the most popular games are Minecraft, Fall Guys, Fortnite," said Andrew Chen, co-owner of Tap Esports Center.

The potential for hours of gaming with high-tech equipment is what draws gamers to the location. But lately, one group has been coming in droves.

That's because the group is an after-school program that gives kids access to Esports. It's a partnership between Tap Esports Center, Philly Esports, and the League of United Latin American Citizens (LULAC).

The two gaming companies worked with LULAC to create discounted rates so that the nonprofit could purchase enough gaming time to allow all of the participating kids to play for free.

The LULAC 21st Century after-school program also comes with a curriculum that applies some of the country's most popular games to lessons in STEM.

It's an important focus for the communities that LULAC serves.

"Working with low-income and low-performing schools specifically," said Tori MIllheim, who works with the kids in the program.

For some of them, gaming provides a safe place to go after school.

"Gaming is something that keeps kids very civil," said Chen.

The program also gives them access to high-end equipment.

"The chair, the pc, the monitor, keyboard, headset, it's' about $4,000," said Chen of the setup at each individual station.

"Sometimes it's nice to maybe come here because computers can be very expensive," said Fischer.

But the program isn't all about the games.

Jack Cohen of Philly Esports says they also work on their communication and critical thinking skills.

"There are so many career paths they can take with Esports," he said.

Maybe that's why the kids are already so into the eight-week program.

"We've had students come up to us and ask if they can take the curriculum home and try it out after school," said Alexis Stotler, who also works with the LUAC program.

Whether it's about building a future or just an afternoon escape, they hope a win in the virtual world translates to real life.

"If you're good at what you do and you practice," said Chen. "just like any other sport, the sky's the limit."