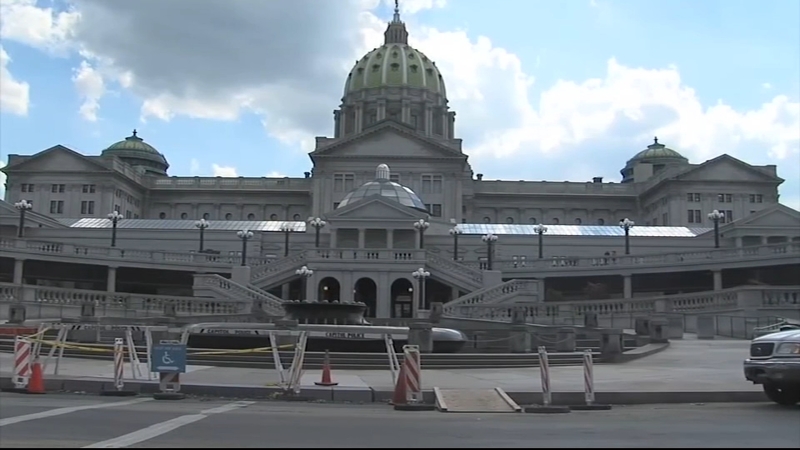 HARRISBURG, Pennsylvania (WPVI) -- An FBI memo circulated to law enforcement agencies across the country is warning of "armed protests" planned in all 50 states from January 16 through at least Inauguration Day.

The intel is being taken very seriously by authorities especially in light of the investigation into what threats authorities were aware of prior to the deadly violence that unfolded in the nation's capital last Wednesday.

In Harrisburg, leaders were briefed by authorities responsible for the security of the Pennsylvania State Capitol.

SEE ALSO: No public access to US Capitol on Inauguration day, as FBI warns of armed protests in all 50 states
EMBED More News Videos

Running through at least Inauguration Day, armed protests are being planned at all 50 state capitals and the Capitol, according to FBI.

"Many members have contacted me especially last Wednesday as we saw the terror unleashed on our nation's capital," said McClinton.

She said during her swearing-in ceremony the day before, protesters were out on the steps of the Capitol.

A memo obtained by Action News that's being circulated among Senate staffers states, "All Senate Capitol and District Offices will be closed beginning Friday, January 15 at 5 p.m. until Thursday, January 21 at 8 a.m... Capitol Police has closed the Capitol plaza from Monday, January 18-20, 2021 to prepare for any protests/riots during that time."

This memo is circulating among some staffers within The PA State Capitol. This as The FBI is alerting law enforcement across The Country about Threats of violence and “armed protests”. The Capitol Police will close The Plaza for potential protests / riots. @6abc pic.twitter.com/GHUImoIy2b

The FBI is warning of plans for armed protests at all 50 state capitals and in Washington, D.C., in the days leading up to President-elect Joe Biden's inauguration, stoking fears of more bloodshed after last week's deadly siege at the U.S. Capitol.

Separately, Collett said within her district, since last week, she has seen tensions rise. She has been flooded with emails from constituents about signs and flyers posted promoting racial discord and white nationalism.

"It's no coincidence to me after Wednesday's events last week we're seeing these signs pop up," said Collett.

In Trenton, where New Jersey State Police is responsible for the security within the state Capitol, a state police spokesperson said in a statement they are working with federal and state law enforcement agencies.

"Anyone planning to carry a firearm must be licensed to carry in New Jersey and have the proper documentation in their possession," the statement read.