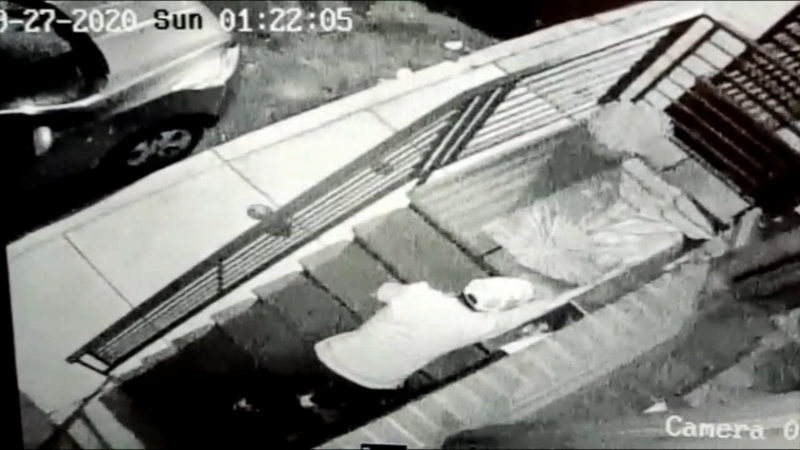 PHILADELPHIA (WPVI) -- A woman in Philadelphia's Fishtown section is hoping to track down a porch pirate who stole a package that contained family belongings that were shipped from overseas.

"He literally crept up," said Myers. "And he lifted up our doormat, took his package, got on his bike and rode away."

New mom, Stephanie M, reacts to a porch pirate making off with a package from family in the Netherlands intended for her 2 week old son. The stolen parcel full of mementos is only compounded by the fact they are unable to see loved ones b overseas because of the pandemic @6abc pic.twitter.com/ZnWM7o4IeO

The suspect took off south on the 2300 block of Mercer Street.

In a 20-second video clip, priceless keepsakes from loved ones in the Netherlands were gone in seconds.

"Unfortunately we don't know what was inside and there was no way of tracking it because it came international. We can't see, and we have no clue when we'll be able to see them or thank them. And they can't come here because of COVID-19. It makes things even harder," said Myers.

Porch pirate makes off with family mementos meant for a Fishtown family’s new baby. The package came from their loved ones in the Netherlands, who they haven’t been able see due to the pandemic. The new mom asking the thief to have a conscience @6abc pic.twitter.com/OUzfoM2if6

While Myers says she doesn't recognize the thief, neighbors on her Fishtown block say this has been an ongoing issue to the point where they've tried to develop a system to curb the petty crimes.

In Myers' case, she said she had no idea this parcel was arriving and had no way of tracking it.

She posted the home surveillance on social media hoping someone recognizes the porch pirate.

"I posted this on the page without a video of his face because what I really wanted was him to bring it back because it has no value to him. It's only personal. I would prefer he bring it back so our son could have it," Myers said tearfully.

Anyone who recognizes the man in that surveillance is asked to contact the Philadelphia police.
Report a correction or typo
Related topics:
philadelphiacrimetheftporch piratecaught on video
Copyright © 2021 WPVI-TV. All Rights Reserved.
More Videos
From CNN Newsource affiliates
TOP STORIES