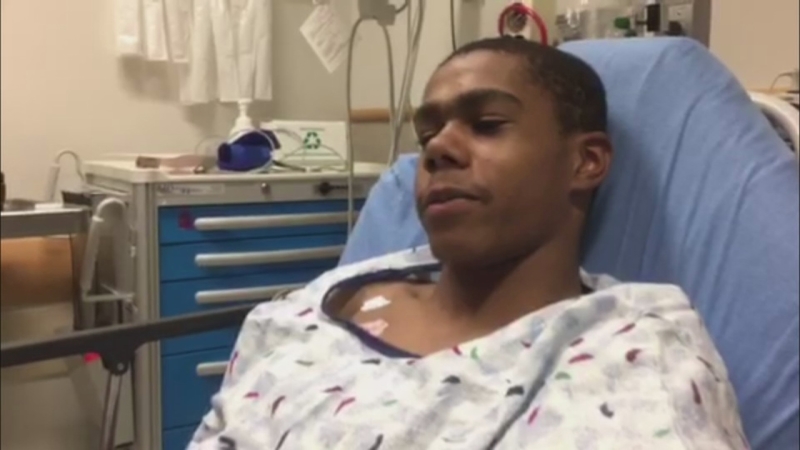 OVERBROOK (WPVI) -- A Philadelphia teen is being called a hero after rescuing a baby from inside a burning home in the city's Overbrook section.

The fire started around 10:30 Saturday morning.

It destroyed a family's home on the 1000 block of Flanders Road.

There is not much left to salvage inside.

Neighbors say the flames were huge.

"Coming from 66th and Malvern you saw the black smoke up in air," a neighbor said.

But all 8 people inside, 3 adults, and 5 little children are alive.

Much of that is because of the heroic actions of brave 17-year-old Rudy Edwards.

"Yeah I feel good about that," he said.

He should feel good and it's amazing he can crack a smile Saturday evening.

He's lying in a bed at Children's Hospital after he saved his one-year-old nephew, who was trapped inside.

"I wasn't thinking nothing when they just said Bryce is in the house. I just got up and went in," Edwards said.

The Overbrook High School student tells us after he and his uncle William were able to get everyone out to safety, a quick head count would reveal that a one-year-old was still inside.

Neighbors say they watched in disbelief as he ran back into the burning house.

Some prayed and others were scared.

Edwards says the conditions inside were almost unbearable.

"I couldn't see. I couldn't breathe. I just went in." When asked how did he find? Edwards said, "He coughed. Did a little cough. And then I knew for sure he was somewhere on the couch."

Once he had his nephew he ran outside.

Witnesses say he handed his mom the baby, then collapsed.

Edwards says he doesn't remember much after making it out.

"I gave him to my mom and that's when like they took him. I just fainted right there and felt dizzy, so I just layed down and passed out, and when I woke up I had a mask on," Edwards said.

He suffered from smoke inhalation, and some bumps and bruises.

Action News asked, you're not surprised he ran back into the house?

"No, not surprised but I am proud of him," Walker said.

He says he'd do it all again to save his family.

"I just wanna thank God everyone got out the house safe. That I get to be with y'all, that I'm good and everyone else is good," Edwards said.