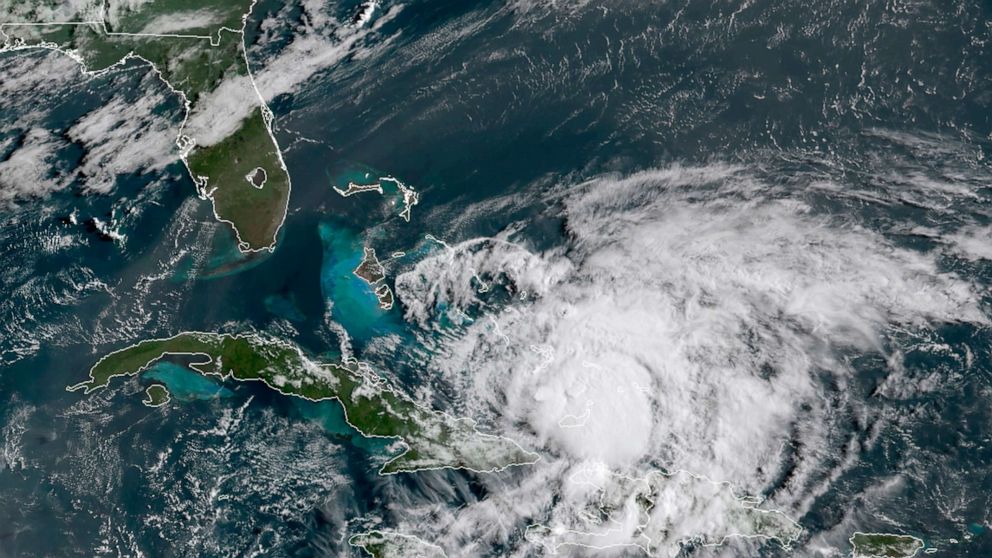 Hurricane Isaias, a Category 1 storm, delivered torrential rains and high winds to the Bahamas Friday before taking aim at eastern Florida, according to forecasters.

As of 11 p.m. ET, Isaias remains a Category 1 hurricane with sustained winds of 80 mph. It is moving northwest at 15 mph and the center is currently about 135 miles south-southeast of Nassau, Bahamas.

Bands of heavy and tropical storm conditions are spreading over the central Bahamas. The latest forecast track shifted slightly westward, closer to the Florida coast, but that also means a slightly weaker storm. Some strengthening is still possible before Isaias begins to impact South Florida tomorrow, however the peak intensity has been lowered from earlier today.

A hurricane warning is now in effect for parts of the east coast of Florida, from Boca Raton to the Volusia/Brevard County line.

The National Hurricane Center said that the Bahamas would experience wind gusts up to 75 miles per hour and heavy squalls throughout the day. Four to eight inches of rain is expected to fall in the Bahamas, according to the NHC.

"These rainfall amounts will lead to life-threatening flash flooding and mudslides, as well as river flooding," the NHC said in an earlier report.

Forecasters predict the storm will travel northwest and arrive in southeast Florida on Saturday and Sunday.

Parts of the state could see two to four inches of rain with isolated maximum totals of six inches, according to the current forecast.

"These rainfall amounts could result in isolated flash and urban flooding, especially in low-lying and poorly drained areas," the NHC said.

The NHC added that its current models show Isaias strengthening, but the forecast of a possible Category 2 storm was removed. The NHC forecast cone has shifted slightly west, indicating the storm could affect parts of the Carolinas Sunday night into Monday.

The latest forecast track also accounts for some type of transition into a post-tropical or extra-tropical low as it travels up the East Coast.

Florida officials are on high alert and watching the storm closely. Gov. Ron DeSantis announced Friday that he has declared a state of emergency in every coastal county on the east side of the state from Miami-Dade to Nassau Counties.

The governor said the state is preparing to create shelters and will activate them depending on the storm's path. COVID-19 testing sites that are in those counties would be closed, but the governor noted that the ones located on the west side of the state will remain open.

Virginia Gov. Ralph Northam also declared a state of emergency in advance of Hurricane Isaias, which is expected to impact parts of coastal Virginia starting on Monday.

"Hurricane Isaias is a serious storm, and current predictions indicate that it may impact parts of Virginia as early as this weekend," said Northam. "This state of emergency will ensure localities and communities have the assistance they need to protect the safety of Virginians, particularly as we continue to deal with the COVID-19 crisis. I encourage Virginians to take all necessary precautions, monitor local weather forecasts, and stay alert."

NASA and SpaceX said Friday they decided to move forward with plans to bring astronauts Robert Behnken and Douglas Hurley home to Earth with a splashdown on Sunday.

Officials in Miami-Dade County announced Thursday that parks and beaches would close in anticipation of the storm.

Isaias already caused tremendous damage to Puerto Rico and the Dominican Republic. Mudslides left people and cars stranded in the streets according to authorities. There were as many as 134,086 customers without power on the island Friday afternoon, with 10 hospitals, mainly in western Puerto Rico, using generators and 147,000 customers without water.