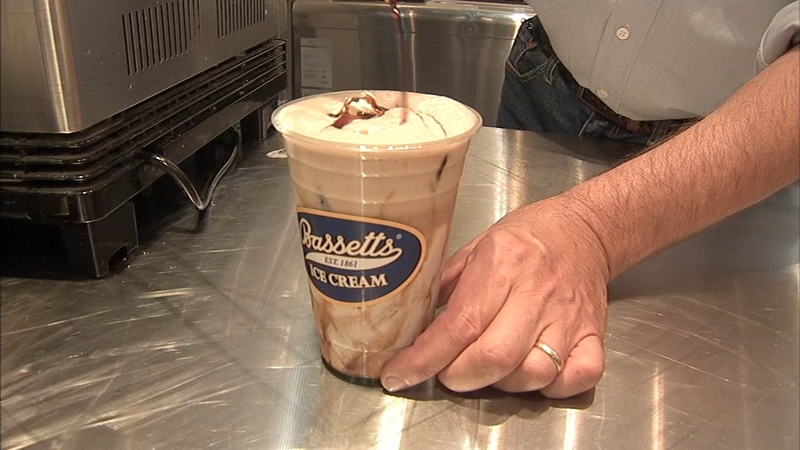 PHILADELPHIA (WPVI) -- There's something deliciously significant happening at this very moment at the historic Reading Terminal Market - a merger of two of Philadelphia's most famous flavors: ice cream and root beer.

It's sort of like history in a cup and it's now being served at the original marble countertops that have been at Bassett's Ice Cream since the market opened in the 1800s.

Bassett's Ice Cream, the oldest in America, has been a staple at Reading Terminal Market since the day it opened.

"There are 6 generations involved now and we started here in 1893. We were the first merchant to sign a lease here - and the only original merchant still here," said Roger.

Roger's grandfather would hand churn six flavors in the basement below the market.

"And he would come up and get the ingredients from the market and get the milk from the local farmers, which were only a mile away," he said.

Today, the Bassetts are teaming up with another iconic "made in Philly" flavor - root beer - invented by a local man named Charles Hires.

"And he started selling them right here in Philadelphia at the 1876 Centennial Fair, which was held in Fairmount Park and it was a celebration the 100th anniversary of the founding of United States," said Theresa Altieri Taplin, author of the Encyclopedia of Philadelphia.

Local beverage staple, Hanks, is carrying on that tradition in the birthplace of the fizzy favorite.

And now, a union of these two historic, unmistakable philly icons: the root beer float shake with the float on the bottom amd the milkshake on top.

Adorned with a brand new root beer drizzle - a syrup Hank's created just for Bassett's - and celebrated with an official citation from City Council.