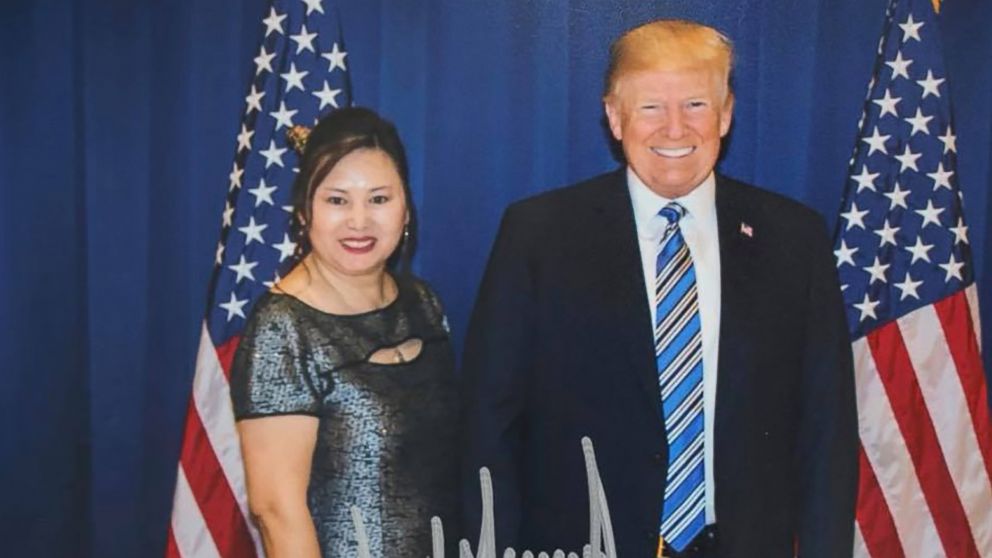 Yang spoke to ABC News days after high-ranking Democrats in the House and Senate sent a letter to the FBI requesting criminal and counterintelligence investigations into her. She told ABC News she is not a Chinese spy or intelligence threat and said the Democrats investigation makes no sense to her.

Yang said she is "scared" and feels the Democrats are pushing "fake news."

She said she is Chinese, doesn't speak English well and said she is "scared [to] talk." She has "a picture with the president. That's the reason I'm sitting here [telling] the people the truth."

She told ABC News correspondent Tara Palmeri that Trump and New England Patriots owner Robert Kraft were not clients of the spa during her ownership.

"That place, I sold it seven years ago," Yang said referring to her former day spa. "Without the picture, nobody would care that I am the previous owner."

"There's a lot of people in this country that take pictures with famous people," Turk said. "[And] you have to understand that in other countries, a picture is worth a thousand words."

Yang also denied being a part of any illegal activity including human trafficking.

Yang was suddenly thrust into the national spotlight earlier this month in the wake of a Miami Herald report that said she was the previous owner of a massage parlor where Kraft, a longtime Trump friend, allegedly solicited prostitution. Kraft has pleaded not guilty, and Yang's attorneys stress that Yang sold that particular massage parlor six years prior to Kraft being charged.

But Yang's story took on a different dimension when she was later identified by Mother Jones as having founded a consulting firm called GY US Investments LLC targeting Chinese businesspeople and advertising among its services access to Trump, his family and administration officials at Trump's Mar-a-Lago country club.

The mostly Chinese-language website for the consulting firm has been taken down, but an archived version reviewed by ABC News shows the company suggested it could secure dinners and access to events where Trump and Trump associates were present, according to a translation of the Chinese text.

Yang's Facebook page, now disabled, hosted photos of her posing with Trump, Eric Trump and Donald Jr., among others.

Yang told ABC News she is a big supporter of the president having raised over $31,000 since 2017 and her message to friends and family: "I just tell everybody to raise money."

Yang said she is not a member of the President's Florida club but has attended as either a guest of friends or bought tickets to some of the many charities that host events at Mar-a-Lago.

"Everybody can go in when you pay the money for the charity," Yang told ABC.

"...[A]lthough Ms. Yang's activities may only be those of an unscrupulous actor allegedly selling access to politicians for profit, her activities also could permit adversary governments or their agents access to these same politicians to acquire potential material for blackmail or other even more nefarious purposes," the letter said.

"Mrs. Yang loves this country," Merson said last week. "She has lived a quiet life, doing good things for herself, her family and her community."

The Democrats also asked the FBI to investigate allegations of sex trafficking, though Yang was not arrested in the sting that netted Kraft and has not been accused by wrongdoing by authorities. Merson said no sexual misconduct took place at Yang's establishments.

In a statement Tuesday the National Committee of Asian American Republicans, for which Yang had worked since 2015 and until recently, came to her defense. The group, also known as Asian GOP, called Yang one of their "top volunteers," saying they are unaware of any wrongdoing and suggesting the allegations against Yang were part of a "fierce domestic political fight."

Spokespeople for the FBI told ABC News that, by policy, they could not confirm nor deny the existence of any investigation into Yang.
Report a correction or typo
Related topics:
abc newsnational
Copyright © 2020 ABC News Internet Ventures.
More Videos
From CNN Newsource affiliates
TOP STORIES