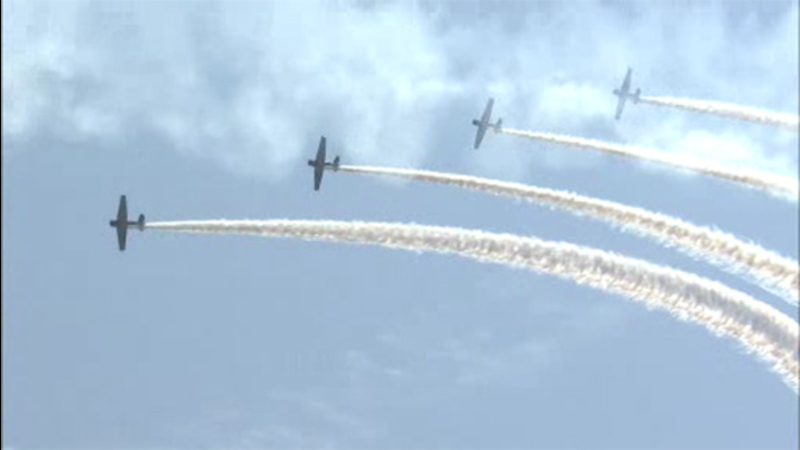 The Atlantic City Airshow will roar over the beach and boardwalk on Wednesday, September 2nd.

Joe Kelly, President Greater Atlantic City Chamber says, "It has become the largest mid-day show in the country. It's over the ocean. It's a great time. It's a great family event and it's a great way to continue the summer."

The U.S. Navy's Demonstration Squadron, the Blue Angels return to Atlantic City for the first time since 2006.

Atlantic City Mayor Don Guardian says, "It's a reason to come and just see them alone."

They will share the air with the U.S. Army Golden Knights, an F-22 tactical fighter.

This year fans even have the chance to witness history.

"We have a gentleman, Andrew Wright that is going to break the world record," said Kelly.

The aerobatic pilot aims to rotate his G202 a record 100 times in an inverted flat spin. Plunging upside down from, 23,000 feet up or as high as the airplane will go down the beach.

The current record is 81 turns by a biplane.

Kelly adds, "So it's a Guinness record and he's going to attempt to break it at our airshow."

For more on the Atlantic City Airshow, you can watch FYI Philly on Saturday night at 7:00 p.m. or Sunday at midnight on Channel 6.
Related topics:
societyatlantic cityn.j. newsfyi phillyac air show
Copyright © 2021 WPVI-TV. All Rights Reserved.
TOP STORIES
Man dead after fight outside Pat's King of Steaks
Girl, 6, hit by vehicle while fleeing Philadelphia gunfire
AccuWeather: Not as hot, some downpours today
Boyfriend now person of interest after woman disappears while on trip
4 treated, including firefighter, following rowhome fire in Manayunk
1 in 500 Americans have died of COVID since 1st US infection
Primark opens at Fashion District Philadelphia
Show More
SpaceX launches 4 amateurs on private Earth-circling trip
Age-progression picture shows what missing NJ girl may look like today
4 young people shot in past week have ties to one school
98% of those who died from COVID this year in Philly were unvaccinated
DNA evidence helps Philly police make arrest in 2007 cold case murder
More TOP STORIES News