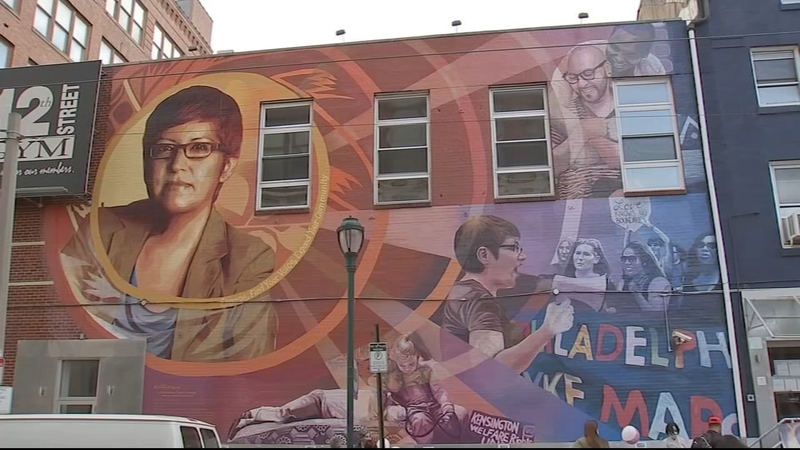 Community outraged after mural of beloved LGBTQ activist painted over

The wall was once home to a mural of LGBTQ activist and Latinx community icon Gloria Casarez.

"I was really surprised and enraged," said artist Michelle Angela-Ortiz, who created the mural.

The image of the mural was projected Wednesday night on the blank wall with the banner that says, "You can't erase our history."

“Even though this mural has been whitewashed her history is not gone,” she said.

Ortiz says she has no plans to work with the developer on new mural after failing to consult with her.@6abc pic.twitter.com/eYs4MBvCXr

The tribute to Philadelphia's first director of LGBT affairs had adorned the former site of the 12th Street Gym in the Gayborhood since 2015. Casarez passed away in 2014 after a battle with breast cancer.

"That's all I've known since I moved to the city and I look at it now and it's just sad," said resident Hayley Roberts.

This past fall, once word spread the site had been sold to New York City developer Midwood Investment and Development, many quickly began to wonder about the mural's fate. Some even protested to ensure the mural would be preserved before the site was torn down.

Months of planning involving multiple parties including Mural Arts Philadelphia eventually led to the decision of a new tribute that would feature Gloria and Henry Minton, a leading Black abolitionist who once lived in the same location.

In an initial joint statement, Midwood and Mural Arts announced their partnership to commission the new installation.

And then, out of nowhere, the mural was painted over Wednesday.

Golden said though it was understood the building and mural were going away, how it was done is really a major problem.

"When they go away, they have to go away with sensitivity and respect and we have to have time to mourn and acknowledge it," she explained.

A spokesperson for Midwood says, "We intend to honor our agreement with Mural Arts. This process and demolition has been planned and approved for months."

Angela-Ortiz is standing with others in the community expressing outrage. Ortiz said she still has no plans to work with Midwood in the future. Her priority now is honoring Gloria and Minton and all that they stood for.

"Even though this mural has been whitewashed, her history is not gone," Ortiz said.

Councilman Mark Squilla's office released this statement on the development:

"Councilmember Squilla is disappointed in the removal today of the Gloria Casarez mural, without notification to him or Mural Arts or the community. The developer, Midwood, and Mural Arts/the community entered into an agreement just yesterday to allocate $650,000 toward an art installation in memory of Gloria Casarez, the LGBTQ community and Henry Minton (a black abolitionist who once resided at the location). This act has undermined the agreement and the trust Mural Arts/the community had placed in Midwood."

On Thursday, the Philadelphia Mayor's Office of LGBT Affairs issued a statement saying it "was shocked and saddened to learn of the sudden removal of 'A Tribute to Gloria Casarez' mural on 12th Street."

The Office of LGBT Affairs was shocked and saddened to learn of the sudden removal of “A Tribute to Gloria Casarez” mural on 12th Street. See our full statement here. pic.twitter.com/nNLTtmmS04