Jon Batiste's "We Are" won the prestigious album of the year.
WPVI 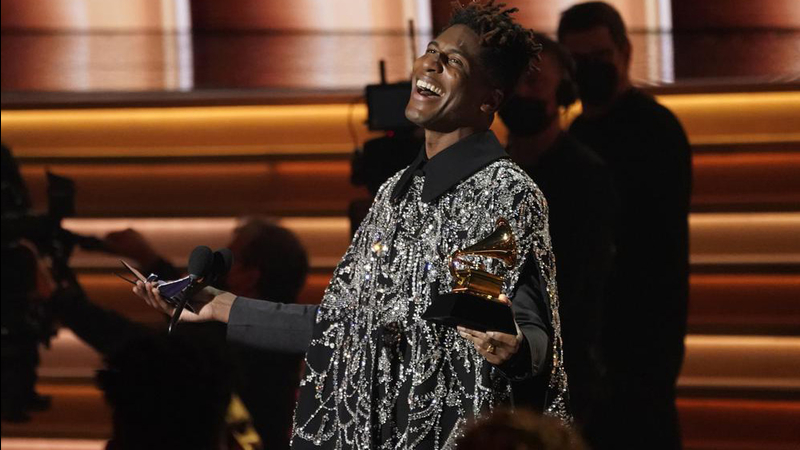 LAS VEGAS (WPVI) -- Jon Batiste had the most Grammy Award nominations and his five wins outpaced everyone, but Philadelphia was well-represented.

Ahmir "Questlove" Thompson won his sixth Grammy for best music film through "Summer of Soul (... Or, When the Revolution Could Not Be Televised.") His documentary also won an Oscar for best documentary feature last weekend. 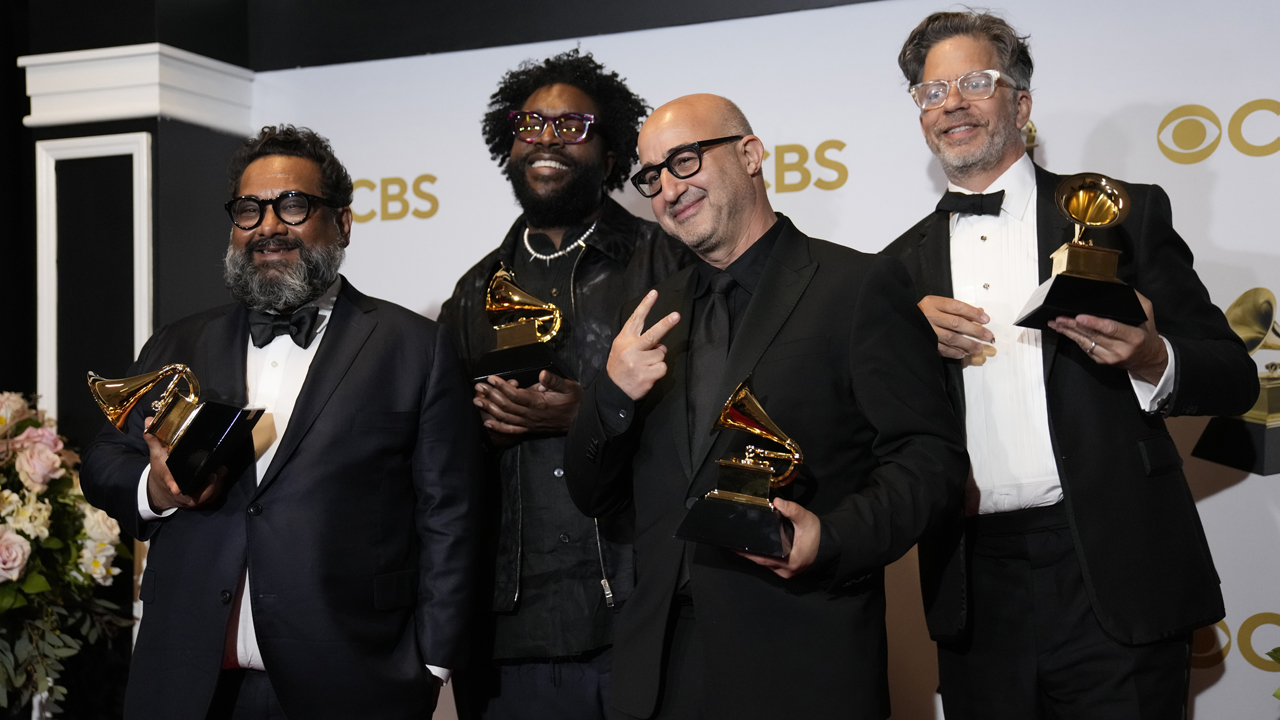 Joseph Patel, from left, Questlove, David Dinerstein and Robert Fyvolent, winners of the award for best music film for "Summer of Soul," at the 64th Annual Grammy Awards.

Jazmine Sullivan took home the Grammy for best R&B album for "Heaux Tales" and R&B performance for "Pick Up Your Feelings," in a tie with Silk Sonic's "Leave the Door Open." 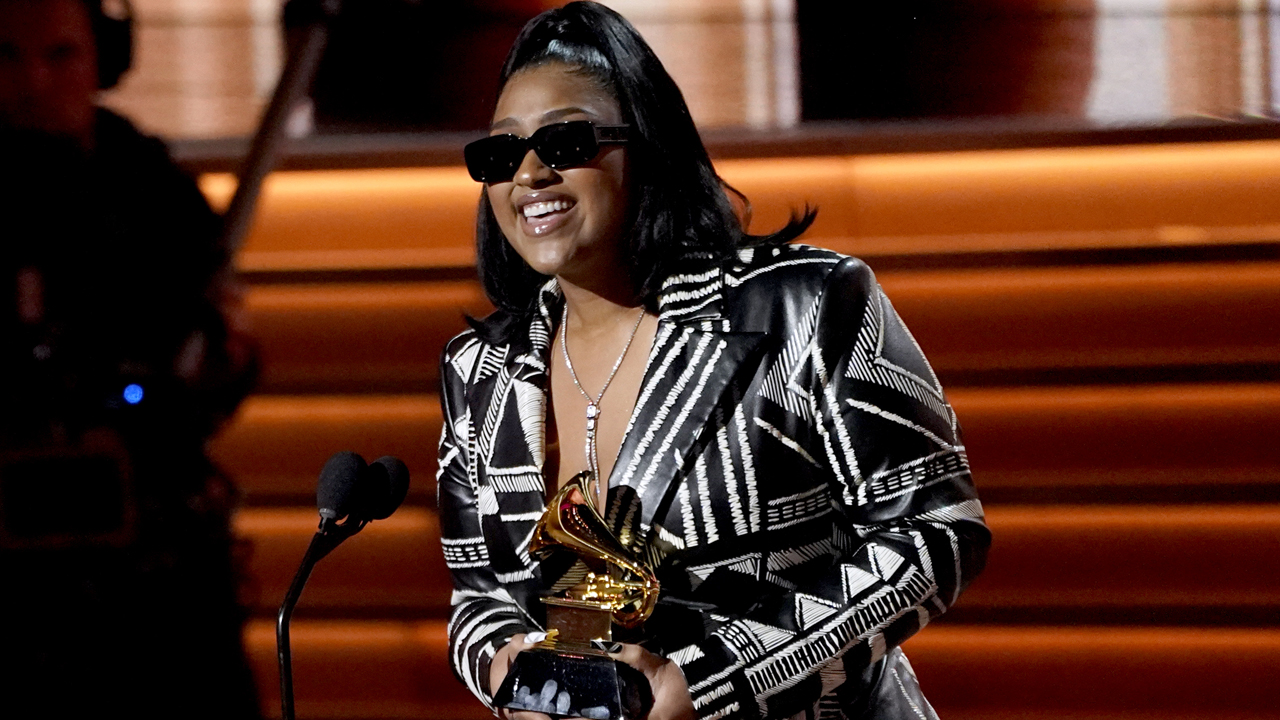 We are overjoyed! Congratulations to Yannick @nezetseguin and The Philadelphia Orchestra on the 2022 GRAMMY Award for “Best Orchestral Performance” for the recording of Florence Price’s Symphonies Nos. 1 & 3. pic.twitter.com/jy8LGcUtOO

Top artists in the industry, including Olivia Rodrigo, Lil Nas X, Billie Eilish, BTS and more, took the stage at the MGM Grand Garden Arena in Las Vegas to deliver exciting renditions of their chart-topping hits.

This was the first time the star-studded show was held in Vegas.

Check out some of the best moments from the 64th annual Grammy Awards:

All Grammys are equal, but each year everyone's attention is on who will win the four biggest awards handed out each year: album of the year, record of the year, song of the year and best new artist.

The year, Silk Sonic -- made up of Bruno Mars and Anderson .Paak -- took home the Grammy for song of the year and record of the year for their hit debut single, the retro-inspired "Leave the Door Open."

Snagging best new artist was Olivia Rodrigo, who said of the honor, "This is my biggest dream come true."

Lenny Kravitz handed out the night's final award, album of the year. The Grammy went to Jon Batiste for "We Are."

"I believe this to my core: there is no best musician, best artist, best dancer, best actor. The creative arts are subjective and they reach people at a point in their lives when they need it most," Batiste said when accepting the trophy. "It's like a song or an album is made and it almost has a radar to find the person when they need it the most."

"I just put my head down and I work on the craft every day. I love music. I've been playing since I was a little boy," he continued. "It's more than entertainment for me, it's a spiritual practice.

Batiste closed out his speech by shouting out the performers nominated alongside him and offering a piece of advice to fellow artists: "Be you, that's it."

Stellar performances from hitmakers in the industry

While most awards were handed out ahead of time, the Grammys filled its live telecast to the brim with amazing performances from some of today's biggest stars.

Silk Sonic kicked off the show with their song "777." Soon after, Olivia Rodrigo then took to the stage with a performance of her mega-viral song "Drivers License."

BTS got the audience out of their seats with their performance of their song "Butter," and the K-pop group didn't disappoint with their epic dance moves. Later, Lil Nas X delivered a mash-up of three songs, "Dead Right Now," "MONTERO (Call Me By Your Name)" and "Industry Baby," the latter with Jack Harlow.

Billie Eilish delivered a powerful rendition of her song "Happier Than Ever," alongside her brother, FINNEAS. She used the moment to pay tribute to Taylor Hawkins, the late drummer of the Foo Fighters, with an image of him on her T-shirt.

Country stars taking to the stage included Brandi Carlile singing "Right on Time," Chris Stapleton belting out "You Should Probably Leave," Carrie Underwood wowing the audience with "Ghost Story" and Brothers Osborne closing out the show with "Dead Man's Curve."

A message from Ukraine

A surprise moment came when Ukrainian president Volodymyr Zelenskyy addressed the audience and delivered a somber message of hope. Ukraine continues to fight against Russian forces, who first invaded on Feb. 24.

"The war. What is more opposite of music? The silence of ruined cities and killed people," Zelenskyy said.

In a poignant moment, as some of the biggest names in music were all gathered in one room, he said, "Our musicians wear body armor instead of tuxedos. They sing to the wounded in hospitals. Even to those who can't hear them. But the music will break through anyway."

"We defend our freedom. To live. To love. To sound," Zelenskyy continued, closing out by asking the audience and viewers to "tell our story."

The award-winning singer and actress honored her friend and collaborator Tony Bennett in an emotional performance that brought the audience to their feet.

Before she took the stage, Bennett, who retired from performing last year, briefly appeared in a recorded message that was displayed on screen, sharing, "Hi everyone, please welcome Lady Gaga!"

Gaga first delivered a heartfelt, enthusiastic rendition of their hit, "Love for Sale." Then, she slowed it down with "Do I Love You," another song from her second collaborative album with Bennett. While she performed, sweet images of the longtime friends appeared behind her.

Remembering those we lost

A staple of every awards show, this year's Grammys in memoriam delivered all the emotion one might expect when honoring all the talented people who died in the past year.

The segment kicked off with a moment of silence for Foo Fighters drummer Taylor Hawkins, who was found dead on March 25, as the band's song "My Hero" played. The names of those we've lost -- such as Meat Loaf and DMX, to name a few -- then began to flash across the giant screens.

Meanwhile, a tribute to Stephen Sondheim, the legendary Broadway composer and lyricist, was at the center of this year's in memoriam. Sondheim, who died Nov. 26, is behind some of the most beloved shows ever, including "Gypsy," "Sweeney Todd: The Demon Barber of Fleet Street" and "Into the Woods."

Cynthia Erivo, Leslie Odom Jr., Ben Platt and Rachel Zegler took to the stage to honor him in a medley of some of his most memorable songs, including "Not a Day Goes By" from "Merrily We Roll Along," "Send in the Clowns" from "A Little Night Music" and "Somewhere" from "West Side Story."