The United Nations estimates as many as 1.2 million people have evacuated Ukraine so far.
WPVI
By Dann Cuellar and 6abc Digital Staff 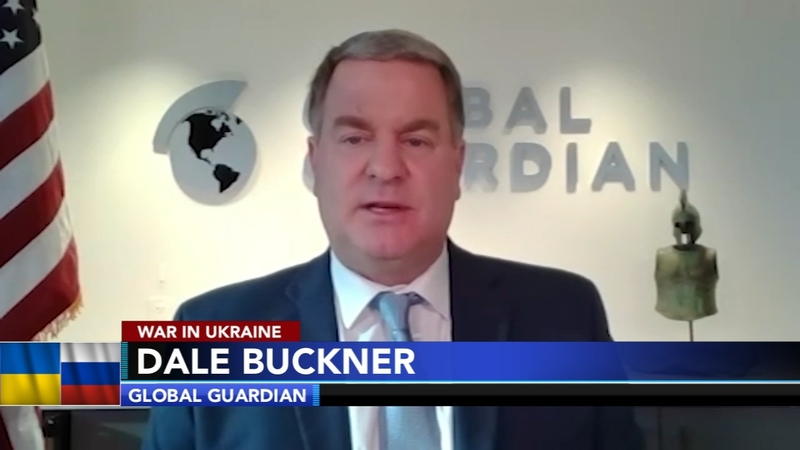 PHILADELPHIA (WPVI) -- As Russian forces continue to make deeper inroads into Ukraine, a retired army Green Beret and his security firm have been making an effort to get as many American expatriates working for American companies out of harm's way.

"It's very high risk," said Dale Buckner, CEO of Global Guardian, an international security firm working for a slew of fortune 500 companies to get their personnel out of Ukraine. "It's incredibly violent. We couldn't get into downtown center city Kyiv until two days ago."

Buckner says he has about 125 agents conducting delicate operations to evacuate American expatriates and Ukrainians working for American and European companies.

"We needed a safe house. We needed to do some recognizance to get through the checkpoints and understand when and where we should move around the city," said Buckner.

In nine days, Buckner says they have evacuated almost 4500 people.

But as the Russians close in, their time window is narrowing.

"It's closing as we continue to see the deterioration which we do think it's going to deteriorate," warned Buckner.

Meanwhile, in Lower Bucks County, three Ukrainian-Americans are on their way to Poland to deliver humanitarian aid collected by family, friends, and supporters over the last few days.

Andriy Penchak says he knows it's risky for him and his friends to go into Ukraine to deliver thirty suitcases worth of supplies.

"I don't care about my life. The war has to be ended. One life of mine, for example, let's say, is nothing. The stuff I'm going to be bringing is going to save tens of hundreds of lives," said Penchak.

But Penchak's wife back home worries beyond belief but supports her husband's efforts.

"I just want Ukraine to get help. Ukraine is fighting alone for a free world," said Yuliya Penchak of Langhorne.

The United Nations estimates as many as 1.2 million people have evacuated Ukraine so far.

They expect that number could reach as many as four million at some point soon as the war progresses in the days ahead.