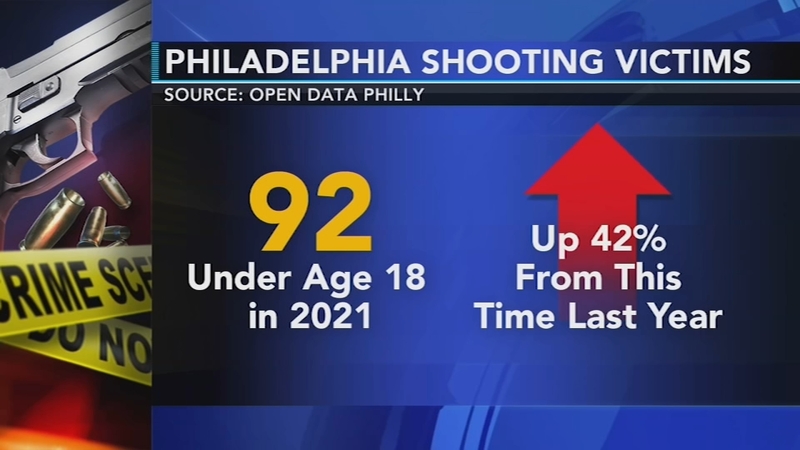 PHILADELPHIA (WPVI) -- Philadelphia officials took the time Wednesday to showcase part of the $150 million plan designed to curb the rampaging violence across the city.

Mayor Jim Kenney said the process will be difficult, but the goal is simple.

"Build trust, build relationships to get illegal guns off the streets and to put in place programs that give people the opportunity to make the right decisions in their life as opposed to making the wrong ones," he said.

Meanwhile, the violence across Philadelphia continues moving toward historic levels.

According to Open Data Philly, so far this year, 1,012 people have been shot in Philadelphia. That is a 27% increase over last year at this time.

Ninety-two of those shooting victims are under the age of 18, including a three-year-old who was shot and injured on Saturday.

"These are our children. Make no mistake, the ongoing violence witnessed across our cities serves as a somber reminder that more work needs to be done," said Police Commissioner Danielle Outlaw.

Philadelphia officials showcased part of the $150 million plan designed to curb the rampaging violence across the city.

Those numbers coincide with 260 reported homicides in the city this year, a 38% increase year to date.

Jermaine Thurman's son, Nasir Marks, was one of those victims.

Nasir was murdered two weeks before he was set to graduate high school.

Jermaine says his concern now is that there seem to be more long-term solutions to problems that are already here.

"I think since my son got murdered it had to of been at least about close to 40 people who died," he said. "Kids and everything, as for politicians, I don't know what they can do, make promises."