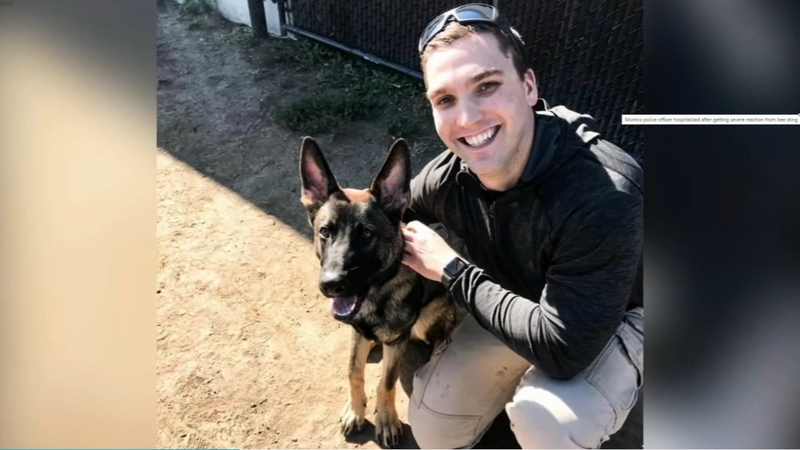 "This is the first time he ever reacted that way," Hatboro Police Chief James Gardner said. "He is a very important part of our police department."

Allen's wife, Whitney, who is pregnant with their second child, was there when it happened. She started chest compressions until the ambulance arrived.

In a Facebook post earlier this week, she said the 35-year-old officer was deprived of oxygen after the reaction to the sting. Because of that, she said he's now sedated battling a brain injury.

He is listed as critical but stable at Penn Presbyterian Medical Center.

"Him and his K9 Louie, about a 3-year-old German shepherd, are really fixtures in our community," Chief Gardner said.

Whitney thanked everyone for the "continued prayers, thoughts, generous donations, and sweet gestures as we navigate this unimaginable time as a family."

In another post, Whitney said Ryan underwent an MRI Wednesday night which confirmed he suffered a severe brain injury from his cardiac arrest.

"We were given hope that individuals who have sustained similar brain injuries such as Ryan's have gone on to have positive outcomes and I am overcome with a sense of relief and hope he will continue to overcome the odds and we are giving him all the time he needs to heal," Whitney said in a post Thursday afternoon.

She said her husband is fighting hard to come back to her and their 3-year-old son Jackson.

The Montgomery County Hero Fund is providing support for the Allen family. One hundred percent of donations made in his honor will go to Officer Allen and his family.

"The purpose of the fund is to provide immediate and ongoing relief and services to any law enforcement officer, military personnel, firefighter and EMS personnel, and their families during times of crisis," the website says.

Allen has served as a member of the Montgomery County Drug Task Force and is the department's first aid and CPR instructor.