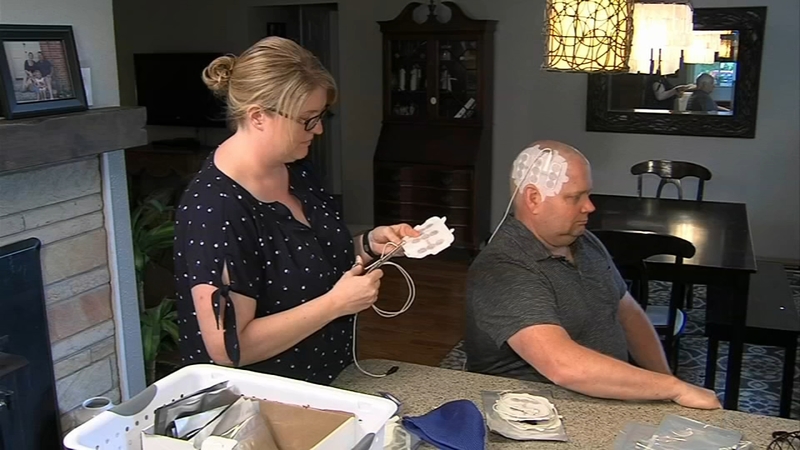 CLEVELAND, Ohio (WPVI) -- A Michigan man's brain tumor is being kept at bay with a new technique - electricity.

Jerry Bennett, 50, is fighting glioblastoma, the same rare, aggressive type of cancer which took the life of Senator John McCain.

The father of three and crane operator says his first signs were numbness, tingling, and a loss of coordination.

His coworker noticed the coordination problems, and urged him to get to a hospital.

At the Cleveland Clinic, doctors decided he'd be a candidate for a new treatment. Every day, after Bennett shaves his head, his wife attaches 4 patches with 9 electrodes to his scalp.

Wires connect those electrodes to a shoulder-mounted battery pack, delivering low-intensity current to the cancer in what's called a "tumor treating field."

"It disrupts cells that are trying to divide and since it is cancer cells that are actually the ones dividing, those get killed preferentially,"says Dr. David Peereboom, of the Cleveland Clinic.

The electrical treatment isn't a cure, however, patients on it have lived an average of 5 months longer than those who didn't use it.

"That might not sound like much, but for a patient with glioblastoma that's a very substantial improvement, that's five months that a patient can live their life, be with their loved ones," says Dr. Peereboom.

It's already been two years since Bennett's diagnosis, and he's seen his daughter's 16th birthday.

Now he has a new goal.