Helicopter crashes in Cape May County Witnesses say the helicopter just dropped out of the sky.

Cape May Court House resident Chad Murnaghan explains, "All of sudden it lost control and nosedived really quickly. The pilot recovered at the last second and spun around, flipped upside down and went right into the trees." 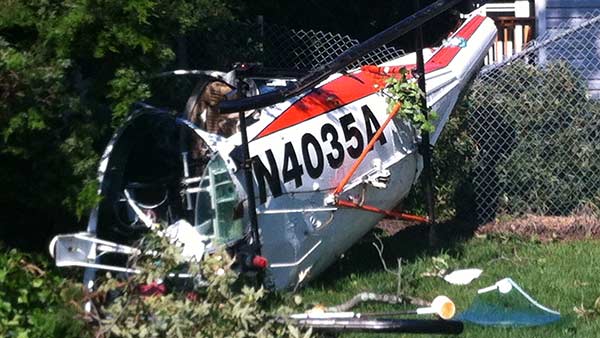 He and his wife heard the wreckage, and he immediately rushed out his backdoor.

Hamer tells us, "There was one person up out of the plane holding his head and walking around. And the medics came and immediately put him down."

Cape May County officials say the pilot was uninjured. The passenger suffered some minor injuries but both are expected to be OK.

The duo work for the Cape May County Department of Mosquito Control and were doing a routine survey when they crashed.

Dr. Peter Bosak of the CMC Department of Mosquito Control says, "We've owned the helicopter since 1983 and have never had an incident like this."

The department says the pilot is a very experienced one and is also a longtime mechanic.

What caused the crash is under investigation, but officials are grateful no one was seriously hurt.

Middle Township Mayor Tim Donohue says, "I think we are blessed that no one else was hurt. That [the helicopter] came down in an area that was not populated, that it didn't hit any homes, and that there weren't a bunch of kids out here practicing fall sports."