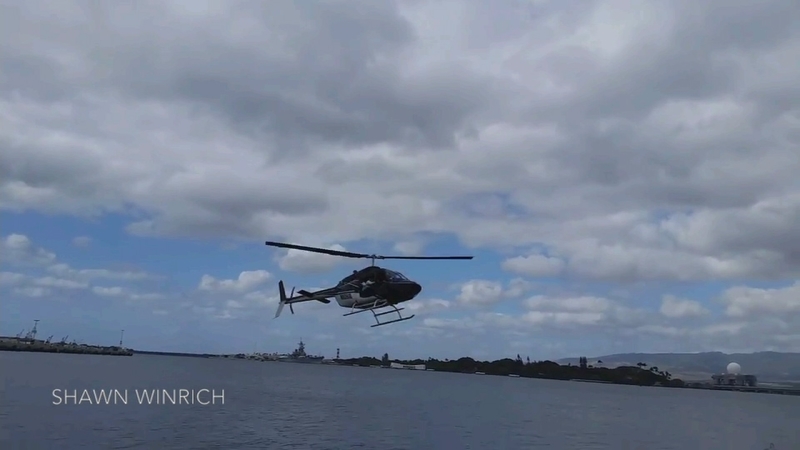 The teen and three family members visiting from Canada were aboard a tour helicopter when it crashed into the water near the Pearl Harbor Visitors Center on Thursday.

Their names have not been released.

Two family members remain hospitalized in stable condition. Another was treated and released.

"So that the 16-year-old's memory lives on, the family has chosen to donate his organs to patients in need," Gidget Ruscetta, chief operating officer at Pali Momi Medical Center, said in a statement.

No information was available for the pilot, who was taken to another hospital.

Federal agencies are investigating the crash.

The boy was trapped underwater and had to be cut free from his seat, according to witnesses.

Federal records show the helicopter is registered to Jeffrey Gebhard of Kailua, Hawaii. The Navy said the helicopter reportedly belongs to Genesis Aviation. The website for Genesis Helicopters says it was founded by Gebhard and conducts tours over Oahu.

A call to Gebhard was not answered on Monday. A man who answered at a number listed for him last week declined comment, citing the investigation.

Civilian divers floated the helicopter to the surface Friday and a crane pulled it out. The Navy said the aircraft was taken to Genesis Aviation's hangar at the airport, where the National Transportation Safety Board will conduct an investigation.

It was the second major crash this year involving helicopters on Oahu.

Twelve Hawaii-based Marines were killed when two military helicopters crashed during nighttime training on Jan. 14. Both aircraft were CH-53E Sea Stallion helicopters that were part of Marine Heavy Helicopter Squadron 463.

Shawn Winrich, visiting from Madison, Wisconsin, was taking photos of Pearl Harbor when he saw the helicopter headed toward the popular tourist destination.

He switched to video, recording the helicopter's dramatic drop into the water.

"All of a sudden it essentially just fell out of the sky and crash-landed in the water," he said last week.

He stopped filming and jumped in to help.

The Honolulu Emergency Services Department took the teen to the hospital in critical condition. On Friday, hospital spokeswoman Kristen Bonilla said the teen was actually 15, but on Monday, she said she was mistaken and he was 16.