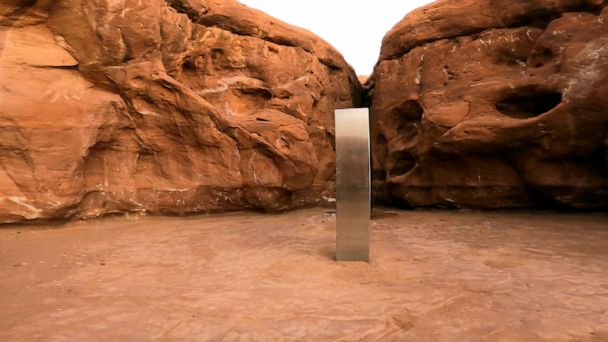 The truth behind the pair of mysterious monoliths is out there, and investigators on two continents are hard at work searching for clues.

Now, an eyewitness has shed some light on how the 10- to 12-foot metal beam was removed from the Utah desert last week.


Mike Newlands, 38, of Denver, told ABC News that he, his roommate and two other friends decided to drive to the Red Rock desert to see the object, which went viral after it was discovered Nov. 18. The group was among the scores of other hikers who traveled to the region to see the mysterious structure and take some pictures.

Around 8:30 p.m. Friday, while Newlands and his friends were hanging out in front of the structure, he said a group of four men came to the monolith and took it down.

"We were shell shocked. We were like, 'Holy smokes,'" Newlands told ABC News. "It was like watching an Internet meme die in real life."

Newlands took photos of the unidentified group removing the structure. The people who removed it kept to themselves, Newlands said, and then left quickly.

A spokeswoman for the Utah state office for the U.S. Bureau of Land Management told ABC News it is investigating the installation of the structure since it is illegal to install any object on public land without permission from the agency.


Newlands said he heard the group call the monolith "litter," and he said he believes it shouldn't have been put in the desert in the first place.

"If people are going to this, get permission, be respectful," he said.

The BLM said the attention generated by the monolith resulted in trash problems for the desert as visitors left human waste and other garbage in the area near the monolith's location. The agency also warned that visiting the spot was not safe, because there is no cellphone service or bathrooms, and specialized vehicles are recommended to traverse the terrain.

On Monday, the San Juan County Sheriff's Office said it wouldn't investigate the structure's installation or removal, because it was private property and no one claimed responsibility for putting it up or owning it. The office did not immediately return messages for updates on the case Tuesday.

Officials nearly 6,000 miles away in northeastern Romania were also scratching their heads over a similar monolith that was discovered Nov. 26. Just like the object in Utah, the approximately 10-foot mysterious beam disappeared from its spot in the city of Piatra Neamt on Tuesday, according to city officials.


Rocsana Josanu, the culture and heritage official for Piatra Neamt, told ABC News she was baffled by the object's arrival. The land where it was discovered is a protected archeological site that dates back to the second century B.C., so any work on the land requires permission from the government, she said.

"It was facing Mt. Ceahlau or the 'Holy Mountain' as we call it. So, maybe it was used in some ritual," Josanu told ABC News. "We are looking into it."