Newlyweds beat Delta to the altar in hurricane-rushed wedding 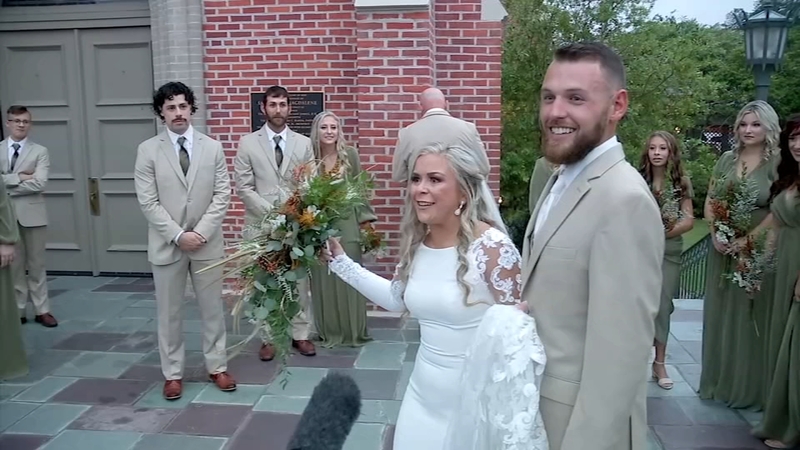 Couple races to get married before Hurricane Delta hits

ABBEVILLE, Louisiana -- Twenty-four hours ahead of Hurricane Delta's arrival, church bells rang out at 6 p.m. and a bride's high heels clicked on the church's front walk as she raced to get to her wedding.

Taylor Choate and Ian Gaspard picked Oct. 10 as their wedding day months ago. In a year when COVID-19 had re-scheduled so many events, they thought they would luck out. Then Hurricane Delta zeroed in on the small town they call home.

"We were supposed to get married Saturday with over 300 people," Taylor to ABC13's Ted Oberg outside Abbeville's Saint Mary Magdalen Church. "We knew about the storm, but we were kind of like, eh, because it wasn't supposed to be coming to us. Then all of a sudden it was supposed to come like right to us. So of course I got hysterical."

It was a moment any bride can identify with.

"She cried for three days," Linda Choate, the bride's mother told us. "She hadn't eaten and she's really, really, really strong in her faith. I just said, Taylor, just chin up baby and hit your knees. He's got you. And we're here today."

Taylor says prayer and her new husband Ian pulled her through, "My Superman here came in and saved the day," she said standing next to him. "He told me that, at the end of the day, we just wanted to get married and it was important that we did it in the church. That was important to our parents and our faith. We were going to originally just come and just our parents and us, we're going to get married. We threw this together."

The crowd of family, good friends and a Louisiana State Trooper (a cousin of the groom) all hustled to get there. The priest agreed and the catering hall too. Even the rain, which fell all day, stopped long enough for the couple's ceremony.

Away from the glow of two newlyweds, there is some fear in this community. In this record-shattering year, Delta is the fourth storm this season to zero in on southwest Louisiana. Outside the church event the groom's grandfather, Purvis Gaspard, admitted to some nerves about the storm saying, "Pretty much worried. She's going to be bad. Looks like it there's storm surge. You're going to see it's coming. It's coming this way now."

Ahead of the storm, traffic leaving Lake Charles was stacked up for miles. Families were leaving behind homes still covered in blue tarps after a devastating blow from Hurricane Laura just six weeks ago. Power to some homes was just turned back on days ago.

Corey Monet, who was evacuating towards Houston, told ABC13 from the driver's seat of his stopped car on I-10, "I had to replace about a third of my roof." When asked what he hopes will be left, "I'm hoping the third that I replaced."

Here they need - and quite honestly deserve - a break. Outside the wedding, there's hope the good luck of a couple newlyweds extends to all their neighbors.