Mike Strizki calls his home the Hydrogen House and for the last nearly 20 years, he's been living off the grid.
WPVI
By 6abc Digital Staff and Bryan Bossler 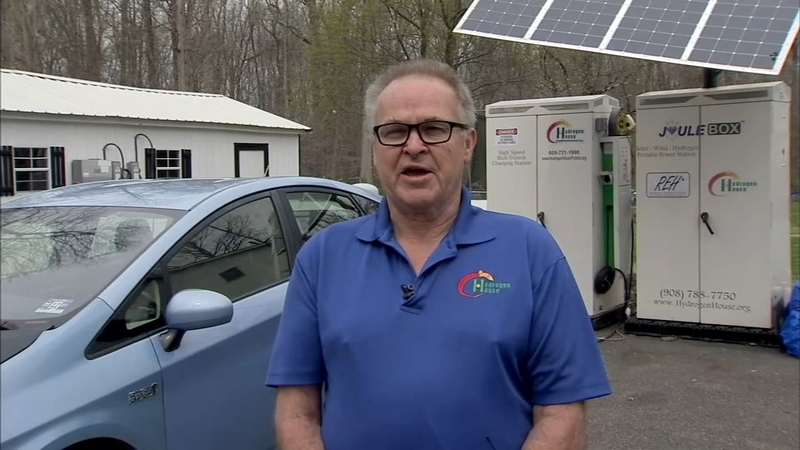 EAST AMWELL, New Jersey (WPVI) -- During Earth Month, we are all reminded that it's important to find cleaner ways to power our cars and homes and one New Jersey man is doing just that.

Mike Strizki has been generating carbon free electricity for his house in East Amwell, Hunterdon County for nearly two decades with water and the sun.

He calls his home the Hydrogen House and for the last nearly 20 years, he's been living off the grid.

What's unusual about this house is that is that in this day of high oil prices, Strizki says his energy is completely free.

"We basically take water and sunlight, we bottle it as hydrogen and we can use it weeks, months, years, centuries from now," he said.

He's converted just about everything in the house to run on hydrogen that would normally use fossil fuels.

"We take excess solar energy and we run it through a device called an Electrolyser, the electricity splits water into H2O - hydrogen and oxygen," said Strizki.

He says hydrogen is stored into the propane tanks. He has ten of them that he has refurbished for hydrogen use and they are currently all full with six months worth of power.

Strizki also has a refueling station where he can power up his car.

"Fuel cells have no moving parts, it's an electrochemical reaction with hydrogen in one side, and oxygen in the other, and it produces electricity," he said.

He even generates water from driving the car.

"Starts as water and ends as water," he said.

Of all the things he's converted, Strizki says that is one of his favorites.

"This really is the cure. You know, the big problem that everybody is saying is what do you do when the wind doesn't blow and the sun doesn't shine. And the answer is you use hydrogen," he said.

Strizki says he has eight grandchildren and he wants to leave a better planet for them to grow up in.