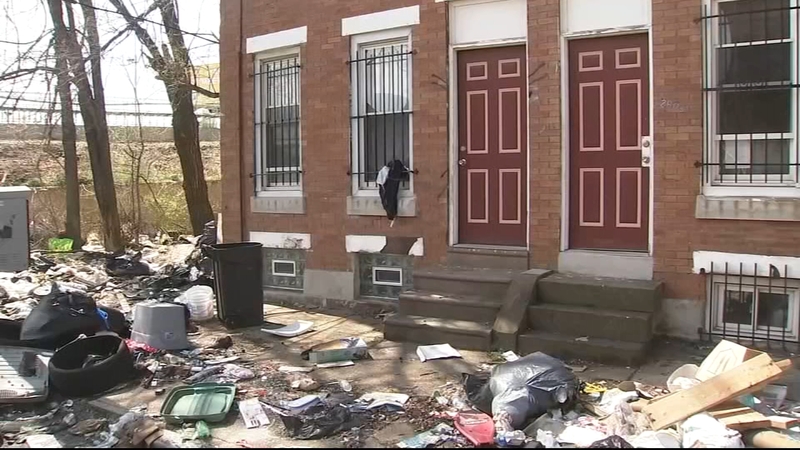 PHILADELPHIA (WPVI) -- Illegal dumping is a growing problem in the city of Philadelphia. It's visible on many street corners, where you see piles of trash and debris.

The city said it's working to clean up the mess, but they need residents to do their part and follow the trash removal rules.

"It's not safe, it's unsanitary, it's obviously an eyesore," said Victoria Johnson, who lives in Hunting Park.

Johnson said her block at 7th and Butler has been filled with trash since the fall.

The city sent Action News a recent video that captured a man on the 1900 block of Grays Lane illegally dumping, according to police who are investigating.

The city said it's a prime example of what is happening across Philadelphia.

"There's also like a Philly culture about it. I see people throwing trash out the window all the time," said Christian Tojil, from Grays Ferry.

At 25th and Washington, there are mounds of trash right by where people park their cars. In Port Richmond, on the 2800 block of Indiana Avenue and Richmond Street, there were piles of trash.

"More than half of the dumping we see around the city now is just residents," said Keith Warren, the deputy commissioner for sanitation.

The city said they were at the Port Richmond location earlier this month to clean it, but you can't tell because people keep dumping.

The city said it falls on the residents to change their mentality and clean up too.

"I do own up to that could we be doing a better job, always certainly, but we are hamstrung by the fact that the places where we do clean, we need the public's help," said Warren.

Johnson sent Action News pictures in the afternoon of the city cleaning up the trash on her block, but she's skeptical of how long it will stay clean.

"The more you clean, they come dump," said Johnson.

The city has a new initiative to visit 100 frequently dumped sites a day, but their resources are always strained because the dumping is occurring at a rate that they can never keep up with.

"That's a cultural thing, a behavioral thing, where people think 'I don't want this trash in my house, I'm going to walk down and put it to the corner,'" Warren added.