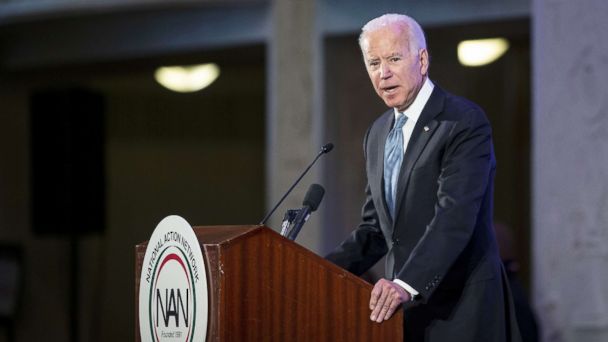 Former Vice President Joe Biden, speaking at a breakfast Monday morning in Washington honoring Martin Luther King Jr., said that white Americans need to acknowledge and admit the fact that systemic racism still exists and must be rooted out.

"The bottom line is we have a lot to root out, but most of all the systematic racism that most of us whites don't like to acknowledge even exists," Biden said at an event hosted by the Rev. Al Sharpton and the National Action Network. "We don't even consciously acknowledge it. But it's been built into every aspect of our system."

He continued, "Because when your schools are substandard, when your houses are undervalued, when your car insurance costs more for no apparent reason, when poverty rates for black Americans is still twice that of white Americans, ... there's something we have to admit. Not you -- we -- White America has to admit there's a still a systematic racism. And it goes almost unnoticed by so many of us."

Biden also expressed optimism that positive change is on its way, referencing the historic nature of the presidential inauguration he attended 10 years ago this weekend, when Barack Obama became the nation's first African-American president.

***"There I was, it just hit me, standing, waiting for a black man to come 28 miles from Philadelphia to pick me up and take me on a 128-mile ride to be sworn in as president and vice president United States. Don't tell me, don't tell me things can't change!" Biden said to applause.

The former vice president is the subject of intense speculation over whether or not he will mount a presidential campaign in 2020 to try to unseat President Donald Trump.

While he did not move closer to announcing a presidential bid Monday, another presidential contender, former New York City Mayor Michael Bloomberg, stoked further speculation about both his and Biden's presidential plans during comments at the same Washington event.

"Whatever the next year brings for Joe and me and I know we'll both keep our eyes on the real prize, and that is electing a Democrat to the White House in 2020, and getting our country back on track," Bloomberg said. "I haven't had a chance yet to talk to the Vice President at length today but I did want to get some pointers from him on how it's like to live in Washington, D.C."
Report a correction or typo
Related topics:
abc newsnational
Copyright © 2020 ABC News Internet Ventures.
More Videos
From CNN Newsource affiliates
TOP STORIES