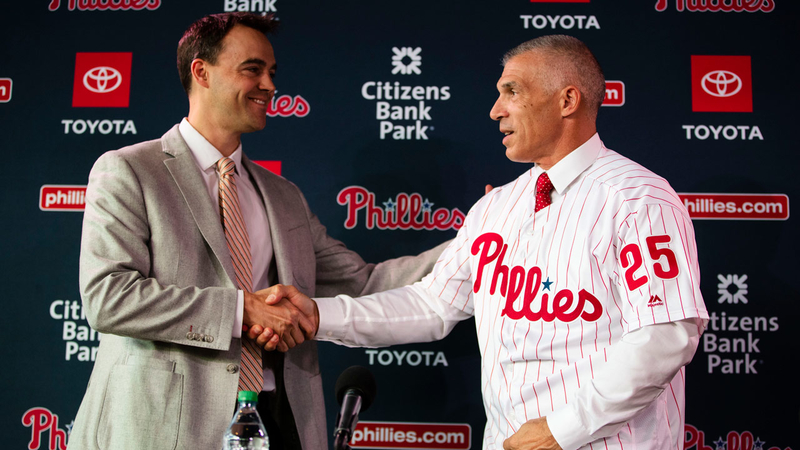 PHILADELPHIA (WPVI) -- They say you never get a second chance to make a first impression, and Joe Girardi made a great one.

The Phillies' 55th manager introduced at a press conference at Pass and Stow restaurant at the ballpark.

Among the first things he said was, "I'm selfish, I want to win, and that's why I cam here because I think there's a great opportunity to win here."

You can watch the full press conference here:

Philadelphia has always called to him he said. His first career hit as a player was against the Phillies. His first road trip was in Philadelphia where he stayed at the DoubleTree Hotel. And his World Series title while managing the Yankees, came at the Phillies' expense.

Joe Girardi says he wants the Phillies to Play hard for the fan base, for that little girl or that little boy who is in the stands that night!

Girardi talked about the passionate fan base, and his own intensity.

He said all the right things and appears to be a perfect fit. General manager Matt Klentak explained that they chose Girardi because "the time to win is right now, which lends itself to bring in a guy that's done that and hoisted that trophy."
Rhys Hoskins was the only player in attendance. Hoskins said the very first thing Girardi asked him about, was his family, which really was telling about the kind of person he is.

Girardi's wife of nearly 30 years and three children were sitting in the front row, he referred to them often, and said about himself that he's a manager that "cares about people."

How do you feel about the Phillies new manager?

Fans were pretty excited about the announcement last week and hope Girardi brings the turnaround the Phillies need.

"He beat us in 2009, he's going to bring one to Philly now," exclaimed Brooks Morris of Harrisburg.

Joe Lattera of South Philadelphia added, "He'll help them. They still gotta get pitching. He ain't gonna play, so."

Phillies fan Darren Phister told 6abc, "Out of all the managers they could have picked from, he was top of my list."

In New York, Girardi had 10 straight winning seasons as manager and led the Yankees to six playoff appearances and one World Series title.

The Phillies haven't been to the postseason in eight years. For them to get there, they'll have to adhere to Girardi's rules, among them: "Be on time, be prepared, be accountable to each other, be respectful, love each other, and trust each other."